Portland takes center stage and serves as a strong argument for the use of setting as character in Greg Rucka’s newest ongoing series from Oni Press.

Greg Rucka’s Stumptown first hit the comics scene in 2008 as an Oni Press limited series and introduced one of his most popular female leads – Dexadrine “Dex” Parios, a down-on-her-luck private investigator with more than her share of character flaws.

Rucka, who is known for strong, realistically portrayed female protagonists, returns to one of his most popular creations in a brand new ongoing series this week. But is Dex Parios the real star of Stumptown? 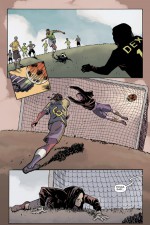 Set once again in the writer’s hometown of Portland, Oregon – the “Stumptown” of the title – the first arc in the series, ‘The Case of the King of Clubs’, is set against a unique backdrop of professional soccer fanaticism and violence.

From the grass-roots game between hard-playing amateur clubs to the all-encompassing, nearly hypnotic depiction of the pro match between bitter Pacific Northwest rivals Seattle and Portland, Rucka’s passion for soccer blares at his audience like the thunderous roar of a hopped-up hometown chant.

Known for a vibrant artistic community that expresses itself in everything from craft beer to music to the visual arts, Portland’s passion for the so-called “beautiful game” is relatively unknown to those who don’t live there, and a unique vehicle through which to experience Rucka’s beloved hometown.

In many ways, Stumptown itself has always been the star of this property. Dex Parios, although popular among fans for her flawed, acerbic, no-BS attitude, acts as an avatar of sorts for the book’s setting – a strong, multi-faceted character in its own right. This has been a trend in many books I’ve reviewed of late, and is heartening to see applied so profusely in graphic narratives, where the true potential of this storytelling device can be explored through the marriage of words and pictures.

Always a hallmark of strong storytelling in prose and elsewhere, the use of setting as character (and, in this case, star) is integral to the creation of a believable secondary world. As Rucka knows all too well from his work on Whiteout and Lazarus, not to mention his numerous prose novels, if your characters don’t have a fully realized setting in which to live and breathe, your story is likely to fall flat.

In Stumptown, we’re treated to a side of Portland we’ve never seen before: zealous soccer fanatics driven to brutal violence and cruelty in the name of their favorite squads.

With a vicious assault bringing the problem of gang-style violence close to home, Rucka drops Dex into the middle of an impending club war that threatens to rock the city to its foundations. It’s an intriguing new twist in the ongoing passion play between Dex and her city, and one which seems poised to challenge her own perceptions of her home.

Artist Justin Greenwood’s gritty, cartoony style is expressive and infused with a bounciness that helps to reinforce the book’s brisk pace. His characters are distinct and enjoy a fluidity of motion that’s sometimes hard to realize in two dimensions. This is particularly important in a story set within the world of professional sports, where movement and action provide the audience, both fictional and actual, with an intense emotional outlet.

Wonderfully organic, character-driven, and passionately crafted, Stumptown is a welcome addition to Oni’s catalog and newfound dedication to long-form projects. As someone who recently visited and fell in love with Portland for the first time, I can’t wait to meet a different side of this beautiful, mysterious city with Rucka as my guide.