The momentum of Joshua Dysart’s action-packed story refuses to let up, denying Renegade and reader alike the opportunity to mourn the death of a hero. It is a powerfully effective – if not uncomfortable – representation of one of the harsh realities of war.

If there is one thing to be said of the recent issues of Harbinger, it is that the pace has been absolutely relentless. As Joshua Dysart and Clayton Henry inch us closer and closer to Harada’s final play for ultimate power, the Renegades have been pushed to the limit. They’ve lost their underground safe haven, they’ve lost the luxury of time, and – as of the end of issue #22 – they’ve lost the element of surprise.

Harbinger #23 picks up the action quickly. After opening with a brief flashback moment between Peter and Kris, we are thrust into the present conflict – literally. Harada is using all of his powers to rocket himself up into the atmosphere so he can get back to Pittsburgh to confront Peter and the Renegades, who are attacking the Harbinger Foundation base there. While Peter is busy destroying Harada’s “lifework”, Flamingo, Zephyr, and Torque take on Ion in a brief but powerful battle that pays off the promised “Death of a Renegade’.

The death of one of their own utterly dwarfs the other “losses” the Renegades have suffered to this point, and yet the pace set by Dysart still refuses to diminish. There is barely time to acknowledge that a team member has died, let alone time to grieve, before Harada finally arrives to challenge Peter.

This sort of understated death isn’t something that we as audiences are particularly used to. We expect a flood of tears, a break in the action, a change of heart, or – at the very least – a Wrath of Khan/Point Break/Man of Steel-style cry to the heavens. 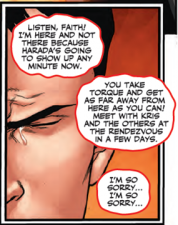 Dysart proves himself too good a writer to resort to that cliché. Killing the momentum he has been building over the past few issues to over-dramatize this death scene would not have served the story well. Instead, he acknowledges that it is not yet the time for grief.

Kris is our window into this acknowledgement, experiencing Peter’s emotional distress thanks to the powerful psionic connection they made at the start of the issue. “Is this what it’s like, being a soldier, Peter?” she muses. “Your best friends, the only people that understand you, they blink out around you… gone forever… and you just… you just have to keep going?”

It is an astute, if not despairing, observation of the dehumanizing emotional desolation of war, and arguably the single strongest piece of writing in the entire issue.

The art is generally very good, though not enough to compete with the caliber of Dysart’s writing. The one notable exception is the aforementioned death scene, in which Clayton’s pencils and Brian Reber’s colours come together in a powerful sequence of panels that capture the action, the drama, and the weight of the ultimate sacrifice made by the fallen Renegade.

Overall, Harbinger #23 is powerful. It balances the broader action sequences with incredible character moments, all the while adhering to the now-unstoppable momentum of the arc. As we approach the story’s finale in issue #25, one is left to wonder: when the major conflict is finally over, how will these characters cope with the grief they have thus far been denied?