In the dedications page, Mignola acknowledges Carlo Collodi, the author of Pinocchio and Fegredo thanks his mother who didn’t dissuade him from joining the circus. That indicates the tone of this tome rather well.

Though his printed adventures may not share the gruff, loveable character portrayed on the silver screen, Hellboy is still a remarkably resilient and versatile character. Primarily thanks to Mignola’s and Fegredo’s contributions in recent years, Hellboy’s supporting cast share those same qualities, and as the character’s fictional history stretches back to WWII, there’s plenty to explore.

This is a rare tale for the horned one though, as The Midnight Circus is an Original Graphic Novel, and also one which is set in the days of the younger Hellboy, when he literally was… a boy.

It’s 1948 and a pre-teen, and curious Hellboy runs away from home, i.e, the Bureau of Paranormal Research and Defense, for a quick smoke. Naughty Hellboy. While enjoying his nicotine, he discovers a drumming clown and a dog in a hat nailing a poster for a circus to a tree. Curiosity beats creepy, and Hellboy runs down the hill and sees the tents of the circus below. This is when Hellboy’s night, and the tale, take some sinister turns.

This is not a Hellboy devoid of fear. This is a frightened, unsure soul, like any boy surrounded by strangers (with the emphasis on “strange.”) He runs, he cries out for his guardian the Professor, and his trusting nature takes some punishment. This tale is set during a time in which Hellboy grows up and learns some scary, but valuable lessons. 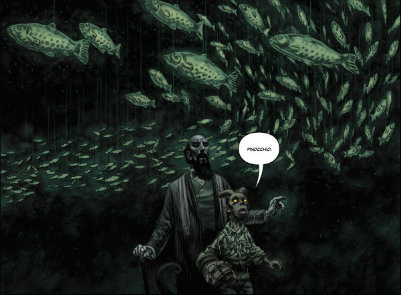 Writer Mike Mignola, frequent collaborator, artist Duncan Fegredo and colorist Stewart are like three tentacles of the same, unique creature. Mignola’s script gives the artists plenty of room to breath, allowing the pace to begin with dialogue centered scenes in the B.P.R.D, which slowly unravels and then strikes like a terrifying cobra when Hellboy descends into the darkness of the circus. The bulk of the book is set within the tents and outlaying darkness of the travelling show, and it is here that Fegredo and Stewart unveil some terrific, and terrifying, imagery. Every scene at the circus is rendered in a gorgeous, painterly style that sets itself apart from the reality of Hellboy’s carers as they search for him. The circus scenes are spectacular and reminded me of the fantastical depth on display in the anthropomorphic noir of Blacksad (also from Dark Horse, and also highly recommended). Although here the visuals are far more grotesque, they still have an undeniable beauty that will have many readers wanting them as wallpapers for their computers, especially the page in which Hellboy is engulfed by a whale’s cavernous mouth.

The sequences involving the circus and the strange visions that Hellboy receives during his night encountering the travelling oddities are rendered in a painterly way to highlight the eerie sensation that runs through these 56 pages. It’s right there in the title after all – Midnight. Circus. Throw in dark woods, creepy 1940 characters, a tale that mirrors Pinocchio’s adventures, and the end result is a re-readable delight, that although short on plot, is packed with atmosphere.