I first became a champion of Jeremy Whitley’s comic-book writing in 2011, when he contacted me about reviewing a little book called Princeless. At the time, the future Eisner-nominated series had just been picked up by a new outfit called Action Lab Entertainment.

Princeless was – and continues to be – a smart, funny, and accessible all-ages book targeting young female readers with its ongoing adventures of Princess Adrienne and her guardian dragon, Sparky. 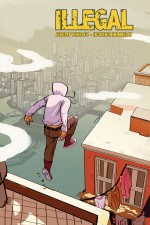 After a role as Action Lab’s director of marketing and gigs writing My Little Pony and NFL RushZone, Whitley is returning to the creator-owned arena with an intensely personal and poignant project entitled Illegal.

Heavily informed by his own history and views on immigration and identity, Illegal chronicles the life of Gianna Delrey, an undocumented mixed-race girl trying to survive in a dystopian society where everyone is registered with the central government.

Currently seeking funding via Kickstarter, Illegal recently achieved its first target of $6,000, with just over 200 people contributing to the project. The always hustling Whitley took time away from his hectic day to answer a few of our questions and shed a little light on what it would be like to live in a world “illegally”.

Illegal is a very personal project for you. For the benefit of those not in the know, could you please tell us what the connection is with your own history?

Jeremy Whitley: My grandfather is Mexican, and while he was a legal immigrant, it’s one of those “grace of God” situations. Like the main character in Illegal, my grandfather also grew up in an abusive household.

I hate to look at the media and only see this ridiculous villainized image of immigrants. Illegal or otherwise, migrating to a different country and leaving your entire life behind for a new future is a tough choice that no one takes lightly.

We used to celebrate that courage in white and Italian immigrants, but for some reason we’ve been taught to hate and chastise it in brown people from Central and South America.

Most of your work is suitable for all ages. Would you consider Illegal a series everyone could read regardless of age?

No. With Illegal I plan on telling a story that’s going to be tough at points. I want to reflect reality through the lens of science fiction. Gianna and her friends are going to go through a lot before this series is over, and it’s certainly not all going to be G- or necessarily even PG-rated. 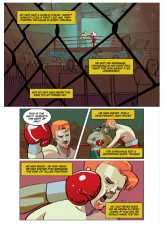 The biggest difference is that in Gianna’s world, all citizens are micro-chipped. This means that should an undocumented immigrant walk into the wrong store or take the wrong street home, they run the risk of being scanned and identified as “illegal” immediately.

Though I’m sure it feels like it some days, that’s not yet a hurdle that undocumented immigrants in the real world have to face. There are some doors you can’t even open without a chip.

What are some of the unique challenges Gianna faces, and what in her own background allows her to succeed in her new environment?

Gianna is a survivor. Gianna had to learn to fight and learn to hide just to get through the day with her dad. Her life as an undocumented immigrant has taught her how to navigate the city in ways that allow her to move quickly, quietly, and unseen. She can’t always use the roads, so she’s had to learn to make her own way. When Gianna’s pursued by the officials, she will put all of these skills to use.

What would you consider the central thematic conflict of Illegal? I would say that while there is no shortage of external conflict, the real central conflict in Illegal is internal.

Gianna doesn’t think there is any way for her to win. She can’t see a future for herself that’s any better than the one she has now. The questions for her are whether she keeps running and hiding or if she should stop running and try to fight.

Considering the current rate of technological progress and growing concerns with identity theft, how likely is a future in which we are all “chipped”?

I don’t know about specifics, but honestly it’s probably a lot more likely than I would guess.

Every year they make upgrades to identification to make them easier to track and it’s nearly impossible to buy and sell anything without leaving some kind of trail. As long as your cell phone is on it can be tracked.

It’s all just a question of where we decide to draw the line between what is possible and what we allow to be imposed on us.

How do you feel this affects our personal privacy? Is the world of Illegal one in which you would want to live?

No, not at all. Illegal is a world in which the rich and the poor are insurmountably separated, and the barrier to entry for immigrants is impossible to overcome. It’s a world in which everything you do and every decision you make is written into your skin forever.

Heather Nunnelly has certainly bought into the premise of Illegal. What makes her so well-suited to the project? 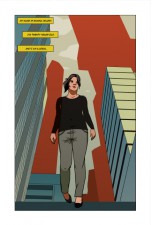 The things that made me want Heather as part of this project were her ability to draw realistic and unique characters and her ability to make motion dynamic.

It’s really important to me that the characters in Illegal look like real people and not like supermodels or superheroes. And the motion needs to look real because these real people are risking their lives, and if we can’t hold the suspense then the book loses a lot of its urgency.

Considering your success with Princeless – also a project close to your heart – how important is it for a writer or creator to tap into their own stories to be successful in their chosen art?

I think it’s very important. I enjoy my other gigs (like writing for My Little Pony) but running a creator-owned comic is hard, so it better mean something to you.

I like doing stories that mean something to me personally because I do a lot of work promoting my books, so I always have something to talk about and I’m never bored.

Help to make sure Illegal reaches its stretch goals to ensure the entire 15-issue run is funded! Head over to the Illegal Kickstarter page and throw a few bucks their way. Remember, every bit counts and you’ll get some cool swag in return! And tell ‘em Broken Frontier sent ya!