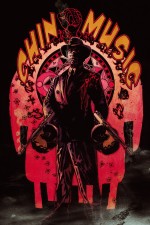 Shaw is a man on the run and lost in time. Fleeing ancient enemies, Shaw finds himself in prohibition-era Chicago surrounded by gangers and demons alike and caught between law enforcement and the local supernatural underground. CHIN MUSIC is a tale of mysticism and violence like nothing you’ve experienced before.

With the help of an ancient force, New father Prophet searches for a weapon to fight a deadly threat to the Empire.

There are crimes far worse than murder. Where logic, reason and sanity end…there is Dark Science.