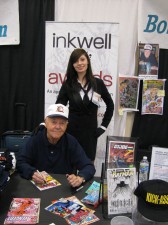 For the 6th season, after nominees were chosen by the separate and independent Nomination Committee, the Inkwell Awards conducted their anticipated, annual voting event with a live ballot at their website http://www.inkwellawards.com for two weeks from April 15 to April 30. The non-profit advocacy is now able to release the ballot results from the five categories targeting the exceptional work of ink artists from 2012 as well as the two recipients of the sixth category, The Joe Sinnott Hall of Fame Award. The award recipients were contacted in early-May and some of the invited artists were able to make it to the Heroes Convention < http://www.heroesonline.com/heroescon/> to be awarded their trophies at the third live ceremony at this venue.

For the FAVORITE INKER AWARD category, it was a tight race between Scott Williams (Justice League) and Klaus Janson (Captain America, Amazing Spider-Man) with Scott in the lead in the beginning and then the two of them going neck and neck until Klaus Janson pulled ahead with 40% of the votes, leaving Scott as Runner-up with 28%.

The biggest ‘upset’ this year was that Jonathan Glapion made a huge impact with his fans, blocking Scott Hanna (A vs. X, Avengers, Avengers Academy, Green Lantern Corp, Suicide Squad) from taking home what would have been his fourth consecutive trophy in this category, the MOST-ADAPTABLE AWARD.  Jonathan, who was a nominee in this slot the last two years, was in the lead the entire two week period of voting with Sal Buscema (G.I. Joe, Dungeons & Dragons, Forgotten Realms) trailing him and Scott Hanna just behind Sal.  In the end Jonathan, who showed inking versatility with such titles as Batman, Aquaman and JLA, took the winning spot with 22%, Scott edged ahead of Sal to take the Runner-up spot with 18% leaving Sal in third place with 17%. 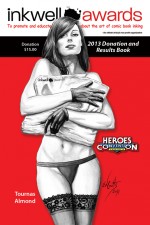 Eber Ferreira has never been a nominee on the Inkwell Awards ballot before but for this year he debuted with a strong, consistent lead in the votes against his fellow nominees for the PROPS AWARD for ink artists deserving of more attention.  He won the category with 39% of the vote with such credits as Nightwing, Aquaman, Detective Comics, Superman, and Stormwatch. Scott Hanna, who was the award recipient in this position last year, took the Runner-up slot with 20% for his work on A vs. X and Avengers.

For the S.P.A.M.I. AWARD (Small Press And Mainstream Independent) for ink work on non-DC or Marvel titles, the legendary Sal Buscema, who’s never been on an Inkwell ballot before, was nominated in two categories, this one and Most-Adaptable; For this one he won distinctly, leading by a gap the entire election, with 58% in recognition for his work on G.I. Joe, Dungeons & Dragons, and Forgotten Realms. Gary Erskine (G.I. Joe), last year’s Runner-up, battled back and forth with Stefano Gaudiano, with Stefano at 23% ultimately edging him out with his work on Valiant’s X-O Manowar.

For the ALL-IN-ONE Award category it was a close, four-way race between Chris Samnee (Daredevil) who led early on, Francis Manapul (Flash, 7 Warriors) a former award recipient in this category two years ago, David Aja (Hawkeye) and Skottie Young (Road to Oz, Dorothy & the Wizard of Oz).  Skottie Young overtook his competition in the end with 22% and David Aja taking the Runner-up spot with 20%.

For this year the Joe Sinnott Hall of Fame Award procedure was changed. Previously a special Nomination Committee, different from the other team by being made up of internal organization members, ambassadors and former ward recipients, would nominate artists who would wind up on the ballot for the public to choose two candidates.  In order to place more emphasis on an artist’s overall career accomplishments and not just their contemporary name recognition by a younger generation of voters, the organization decided to also handle the final vote.

Another concept was for Special Recognition Nominees (SRN) This way a nomination committee member could submit a name of someone they felt deserving of extra attention, whether because of obscurity, recent accomplishments or having passed away. The nominees were, Dick Ayers, Murphy Anderson, John Beatty,Ernie Chan, Frank Giacoia, Dan Green, Tom Palmer, Mike Royer, Josef Rubenstein, Joe Simon and Bernie Wrightson.  The SRNs were Joe Kubert (legendary Artist, Cartoonist, Letterer, Colorist, Author, Editor and Inkwell Ambassador for a year until he passed away) and Violet Barclay AKA Valerie Smith (one of the few female Inkers during The Golden Age of Comics.

The two award recipients chosen with the highest tallied votes, a tie actually, were Dick Ayers and Murphy Anderson.  Tom Palmer was Runner-up and, along with Murphy, they had been formerly been Runners-up or a nominee for the Hall of Fame.

Dick Ayers is part of the “Greatest Generations” that defeated the Axis in World War II, and which helped build the comics industry. He entered the comics field in 1947 on Siegel and Shuster’s first post-Superman feature, Funnyman.  He then worked primarily on westerns, including co-creating the original Ghost Rider from Magazine Enterprises, and served as Jack Kirby’s inker on the Skymasters strip. Joining Marvel (then Timely) in 1951 to ink the solo Human Torch, Dick became forever linked with iconic characters. He mastered the western and war genres with his pencilling and/or inking on the Rawhide Kid, Two-Gun Kid, a revised Ghost Rider and the iconic Sgt. Fury and his Howling Commandos with co-creator Kirby and later John Severin. Dick was Jack Kirby’s ink partner on everything from monster tales like Fin Fang Foom to most every superhero during the “Marvel Age of Comics” in the 1960s. His skills embellished the first Ant Man, early Hulk, Iron Man, Fantastic Four, and the Avengers, eventually pencilling or inking every one of Marvel’s major and many minor characters over multiple decades. Dick Ayers’ legendary status is as indelible as his distinctive ink line.

Murphy Anderson, a true Southern Gentleman, has enjoyed a distinguished career spanning from World War II to the 21st century. Murphy began drawing for pulp magazine Planet Stories and comic books at Fiction House in 1944. After a stint on the Buck Rogers comic strip in 1947, he re-entered the comic-book field, working for various publishers. But when he joined DC in 1950, Murphy  imbedded himself in comics history–and millions of childhood memories. Working on Atomic Knights, Batman, Adam Strange, Hawkman, Green Lantern, Spectre, Superman and more—some versions of which became definitive—Murphy’s graceful, clean ink work over giants like Carmine Infantino, Gil Kane and of course, Curt Swan, became and remains a high watermark of embellishment in the industry. While at DC in the ’60s, he inadvertently revolutionized the field by being the first to switch to the current 10”x15” page size. His exquisite line and detail are hallmarks of a style that exemplifies professionalism and grace, just as the man exemplifies professionalism and class in his field. Murphy Anderson’s work has never look rushed. It is as refined as his appearance is dapper. He’s earned every bit of his legendary status.

Joe Sinnott, the award’s namesake and first recipient, made the following statement about this year’s recipients:

“I couldn’t be happier that two of my old friends are the recipients of the Joe Sinnott Hall of Fame Award for 2013. Dick Ayers and I go all the way back to the fun days at Timely in the 1950’s.  We penciled and inked our own stories.  Dick was famous for his westerns, Ghost Rider, etc. which I felt was some of his best work during that period.  The ‘50s was also in the western genre – “Arrowhead”  being my favorite.  Dick did a great job in the ‘60s and during the super-heroes period over many Kirby pages.  A great friend, artist and person, I couldn’t be happier for you, Dick.

Also, although he worked mainly at DC, I was always a big admirer of Murphy Anderson’s work.  I always felt we had a lot in common.  We were born the same year, 1926.  I believe we were both conservative guys and our pencil and inking styles were similar.  A great penciler himself, he inked some of the great artists at DC such as Swan, Infantino and others, as I did at Marvel with Kirby, Colan, Buscema, etc.

Again, congratulations to both of you – you sure have added more class and talent to an already elite group in our outstanding Hall of Fame.

The results were officially announced at the Inkwell Awards 3rd live awards ceremony that took place at Heroes Con Saturday afternoon on June 8.  Inkwell founder and director Bob Almond acted as host, Inkwell ambassador Cully Hamner acted as Presenter, Jimmy Palmiotti acted as the Keynote Speaker, and Guest Speaker J. David Spurlock presented the Hall of Fame award to Dick Ayers and to Murphy Anderson. Retired committee member Stacey Aragon was presented a special silver inkwell for her time served. The spokesmodel and ceremony hostess Ms. Inkwell was portrayed by the first and original model Chrissy Cutler, and much of the organization, were in attendance, as well as the award recipients except Klaus Janson, Sal Buscema, Eber Ferreira who couldn’t attend the show due to personal matters, international travel expenses and/or scheduling conflicts.

For more info regarding the 2013 results such as winners’ acceptance speeches, nomination committee participants, and more, please keep checking the official Inkwell Awards website at inkwellawards.com

The Inkwell Awards is an official 501(c)3 non-profit organization whose mission is to educate and promote the art form of comic-book inking, as well as annually recognize and award the best ink artists and their work. Now in its fifth year, the organization is overseen by a committee of industry professionals and assisted by various professional ambassadors and numerous contributors. They sponsor the Dave Simons Inkwell Memorial Scholarship Fund for the Kubert School and host the Joe Sinnott Hall of Fame Award.