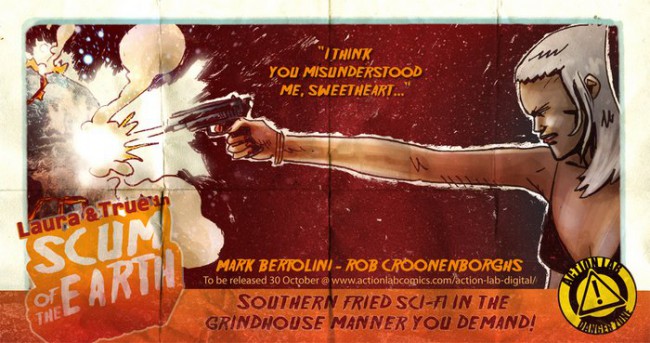 Mark Bertolini and Rob Croonenborghs have created a brand new genre in comics with the release of Scum of the Earth – Southern Fried Sci-Fi! Bring your eyeballs and your brain bits and jump into the grindhouse flavored stylings in this series from Action Lab’s Danger Zone, available at comiXology! In this Inside Look, both gentlemen explain to you how the project came to be. Better read on, or they’ll put your testicles down a bottle of brown tequila.

Mark: Scum of the Earth came about in a couple of ways. The first was a random post on Facebook about a tagline for a comic I developed waaaay back in high school called “the Corpse Corps”. You see how clever I am? Playing on the fact that a lot of people don’t know that ‘corps’ is pronounced ‘core’.

Rob: Now that is smart and I didn’t know you pronounced ‘corps’ as ‘core’. English isn’t my mother language. Learning all sorts of things here!

Mark: Haha, the Corpse Corps! It was a bunch of undead zombie-ish characters (and this was at least 10-15 years before the current zombie craze hit). The idea never developed beyond an initial drawing of a bunch of zombified, rotting characters and the tag line “Life’s a bitch, but death is a bastard.” (The idea never developed because it was terrible). So one day, at random, that tag line came back into my head and I posted it on Facebook. Just because. And then something happened.

My buddy Rolf Lejdegård is a comic book madman. He’s a friggin’ walking comic book idea machine. The guy has more comic ideas before breakfast than most people have in their lives. I suspect ancient rituals involving the killing of goats and massive amounts of coffee are involved…

Mark: Rolf sometimes scares me. But anyway, I put that uber clever tag line up and promptly forgot about it. It was just a thing to post, you know?  So I post it…and in comes Rolf with the world’s biggest literary hand grenade…and he hands me this:

“Meet Laura Bitch and True Bastard – two bourbon toasted gunslingers caught between hardcore scores and soul depraved rehab! Dirty, violent and simple, or so it seems…but who is the alien hitman and why is he after the mysterious markings on the insides of Laura’s heart?”

Yeah, I know, right? He totally blew up my idea (which, to be honest, wasn’t much of an idea) and replaced it with the genius idea of a modern day Bonnie and Clyde kind of story. I immediately knew I had to write this. I had to.

So I did. I developed the story over a day or two (everything was burning a big fat hole in my brain, I couldn’t rest), and started scripting. I decided early on to make this a graphic novella of fifty pages or so. And I wrote those fifty pages in one intense six-hour writing session. I came out of it with a pounding headache and I wanted to puke, but I had the story done. Fifty pages. I did my second pass a couple days later, fixed a few things, and then just like that, it was done. All I needed now was an artist… 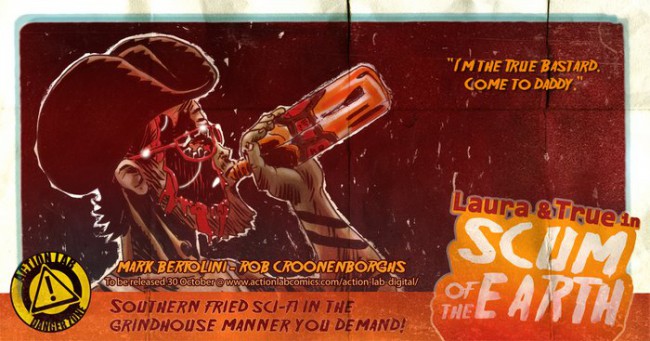 Rob: And then I came to the stage. In between short stories for different anthologies I finally wanted to do something longer than eight pages. I felt ready for something new other than zombies. I just got off “Jesus Hates Zombies: A Jurassic kinda life” where I learned a lot about sequential storytelling. The art on this was kind of rough and raw and I wanted to show people I’ve got a lot more in me than shorties and zombies.

I replied to that small Facebook post of Mark’s (as I was familiar with his work and he was on my list of writers-to-work-with) and the rest is history. I penciled, inked, colored and lettered my ass off  and in two days it was finished – I wish. It took a little over a year with some stops to draw again short zombie stories for FUBAR (here we go again with those damn dirty zombies).

Mark: I was super psyched when Rob came onboard. I loved his work in FUBAR and JHZ, and I couldn’t have been happier to work with him on SCUM. He had this dusty, dry, desert-y feel to his work that just clicked perfectly.

So yeah, the story actually started out with the title “Laura Bitch and the True Bastard”, but once we had a good bunch of pages ready and started submitting them, we got a bit of negative feedback on the title. Which made sense, I think. We weren’t trying to be insulting at all, it was just the names of the characters, but Rob and I decided to make a change to the title, so it became Scum of the Earth.

Rob: I remember there was a lot of back and forth with these titles, which is a very hard thing to do. You’ve got to have a great title to lure in your readership. The title covered the premise of the book in a great way.

Mark: Actually, the title is “Laura and True in Scum of the Earth”. It felt like a good title, as this was like an old grindhouse movie turned into words and pictures on pages. We both liked it, and that was what stuck.

Rob: What happened was, a couple of weeks ago I stumbled upon a bad, ultra-low budget grindhouse flick actually called “Scum of the Earth”, perhaps better known as “Poor White Trash II” (1974). What a coincidence.

Mark: “Poor White Trash” is a great title! Damn, I wish we’d thought of that. We worked on Scum for a long time, and Rob went over his pages and perfected things and changed things.

Rob: I wasn’t really convinced of the color scheme on the first 20 pages and went back and recolored them and also changed a couple of awkward poses and faces.

Mark: We suddenly had a fantastic looking package… but now what?

I’ll tell you… it was right around that time that Action Lab announced the creation of Danger Zone, their mature readers imprint. I figured it couldn’t hurt to send Scum over to them. We’d had a few rejections on the book already, so one more wasn’t going to hurt.

Rob: Ah, rejections. I know them so well. Also not answering on a pitch, both of them the bane of my existence. [Laughs] An integral part of comic book making.

Mark: Rejections! They really are all too familiar. But this time there was no rejection. They really liked it! The Action Lab crew and I started to talk more and more about the book, and we eventually signed the deal that will be bring Scum of the Earth to life as part of the Danger Zone’s second wave, a digital-first release.

We had to make some changes to the book, as Action Lab wanted to release it as a 3-issue miniseries rather than the graphic novel I’d been envisioning. I brought in my friend and top notch freelance editor Steven Forbes to help me break the GN into 3 issues to fit with what Action Lab wanted. Breaking it up this way actually made the story even stronger; as I had to do some rewrites and add pieces to the story.

Rob: And these added pages really brought the story to life, filling in more background and giving more room to breathe for some action scenes. Loved it.

To conclude, here is a 6-page preview of the first issue in their original format. For the digital release, the pages are broken down for easy viewing on a tablet. If you want to read the full story, go ahead and grab Scum of the Earth #1 now on comiXology for just $0.99. 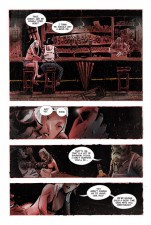 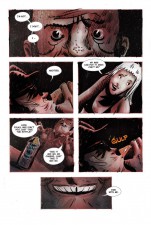 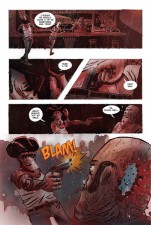 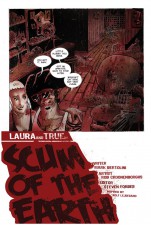 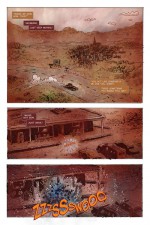 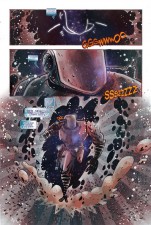 Mark Bertolini is the co-creator and writer of Scum of the Earth. He is also the creator and writer of the supervillain series Breakneck from 215ink, the post-apocalyptic graphic novel Long Gone from AAM Markosia, and he has contributed to the New York Times bestselling anthology series FUBAR. For a profile on Mark, read our recent spotlight in our feature, The Tomorrow People.

Rob Croonenborghs is the co-creator and illustrator of Scum of the Earth. His work appears in his own self-published funny books but more prominently in the WWII zombie anthologies FUBAR and the upcoming Apes with Uzis. He also did the art on the first two volumes of Jesus Hates Zombies: A Jurassic Kinda Life from publisher 215ink.