Atomic monsters come to Kickstarter in the form of a graphic novel that asks, “What if Doctor Strangelove created Godzilla?”

World War Kaiju is the story of an alternate history, one in which the atom bomb was never created and the ultimate weapon of mass destruction is the kaiju—fifty foot tall radioactive beasts spawned from the mysterious KAI-235 isotope. Follow the journey of one journalist as he teams up with a retired CIA operative to uncover the truth about the conspiracy behind the monsters and the men who plan to use them to dominate the world.

World War Kaiju is a tribute to the kaiju genre in all its forms (both high and low). The brainchild of sci-fi author Josh Finney, WWK is a love letter to the golden-age of kaiju cinema. It looks back to an era when the world loved atomic monsters, but feared the atomic bomb, and warps history in ways that only men in rubber suits can.

World War Kaiju is currently seeking support on Kickstarter. The campaign will be running from June to August. Team Kaiju needs a total of $15,000 to complete production of the art, and then print the book at the best quality possible. Our ultimate goal is to supply fans with a 200+ page hardcover edition of book one. 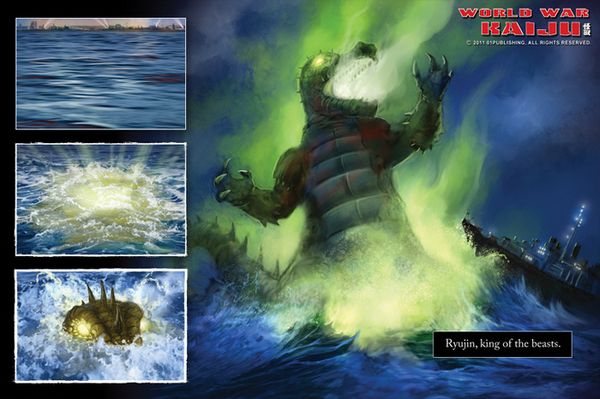 JOSH FINNEY — Author and occasional artist, Josh Finney is the mind behind the awarding winning graphic novels Titanium Rain, Utopiates, and soon to be released novella, OBJECTIVE: Terminus. He is best known for penning stories that are heavy on action, yet always reach deep into heady subjects involving science, politics, and philosophy. In another life, he was an illustrator for DC’s Batman/Catwoman, has done concept design for Star Trek: Enterprise, and created cover art for countless 90′s era industrial & techno bands.

PATRICK McEVOY — Patrick McEvoy is one of your favorite artists. Seriously. You just didn’t know it. You may not recognize his name, but you know his art. McEvoy has spent the better part of a decade illustrating some of the most loved and memorable art to come out of the H.P. Lovecraft mythos. Card games, novels, posters, t-shirts—you’ve seen and probably own at least one piece of McEvoy’s art. He’s best known for his work on Arkham Horror, Call of Cthulhu, and oh yeah…a little known title called Game of Thrones.

MICHAEL COLBERT — Michael Colbert comes from a film background. By day he’s worked as a gaffer on productions such as Babylon 5, Torchwood, Dragon Age 2, and True Blood. By night he writes comics. His latest title is the cyberpunk action tale, Crazy Mary.