The award-winning series returns in a swashbuckling new adventure that contains quite the mix of heart-stopping swordplay, sex, intrigue, and some of Shakespeare’s most iconic characters in roles you have to read to believe.

Following the events of the last story, which left Hamlet, Juliet, Othello, and Shakespeare lost at sea after the destruction of Prospero’s Island, ‘A Notable Pirate’ begins with a bloody swordfight, won by pirate captain Cesario, who then liberates the imprisoned quartet.

Back aboard The Boreas, the captain and Viola, his first mate and lover, confer between the sheets and disagree about their next course of action. Their interactions as a couple are the foundation of this story arc; she is a capable warrior who is accustomed to being the brains of the outfit, while Cesario functions as the captain because females simply can’t be captains (obviously!).

Together they argue, bicker, and love like real couples do, and their private scenes contain some of the most captivating dialogue exchanges in the book.

Speaking of dialogue, Conor McCreery and Anthony Del Col continue the clever use of dialogue from the original Shakespearian works from which the characters are derived. 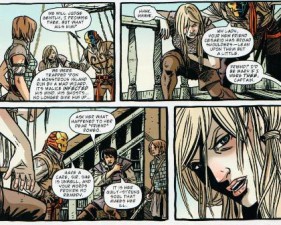 In Twelfth Night, Viola disguises herself as a young man named Cesario, and their existence here as two separate characters is fascinating because they really do function as two parts of a unified whole – directed, it would seem, by Viola.

Viola and Cesario disagree on the value of their new guests, and while she would prefer to trade them quickly for gold, Cesario sees an opportunity to use Juliet to ensure himself a comfortable future ashore as Viola’s husband.

Viola baulks at the idea of leaving the pirate’s life: “I chose this life… You desire children? Whelp them with another wench, or have them with me here.” This decision is driving a wedge between the lovers that may destroy the couple and lead all aboard to destruction in future issues.

The issue closes with a surprising exchange between Viola and Juliet, who is spending copious amounts of her morning heaving over the rail. Their discussion ends abruptly when The Boreas comes under fire from Titus’s ship, The Lavinia.

The Mask of Night gets off to a smashing start, courtesy of McCreery and Del Col keeping the action lively and the characters off-balance. With Cesario not following Viola and suggesting a new direction for their lives, the latter is no longer the mistress of her own destiny, and it’s a joy to watch her struggle.

Andy Belanger’s art style is well suited to this title; his full-page renderings of the ships are obviously labors of love. His attention to detail shouldn’t be overlooked as you are mesmerized by the cool pirates, however. He pays careful attention to the source of light in his panels, and it adds depth to the gravity of the story.

I’ll leave it to the real Shakespeare nerds to publish all of the original text references (down to their act and scene), but suffice it to say that this is the most intellectually stimulating pirate comic ever!