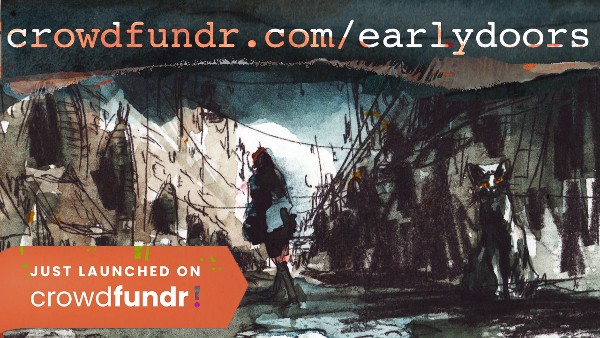 New work by Lucy Sullivan is always an exciting prospect and last week saw the crowdfundr launch for her new comic SHELTER: Early Doors. Sullivan is the Broken Frontier Award-winning creator of acclaimed graphic novel Barking whose work has ranged from everything from self-published zines to contributing to Jeff Lemire’s Black Hammer series.

More details in the press release below. You can back the campaign here!

Inspired by my family history the world of SHELTER will mix folk-horror with cultural mythology and urban unease. A community of stories of the trials faced by the immigrant women of West London. These women however are not just housewives, girlfriends or mothers. This is a world where the supernatural rubs shoulders with the mundane. Where whisper networks and the old ways control local governance and only that will see you through. 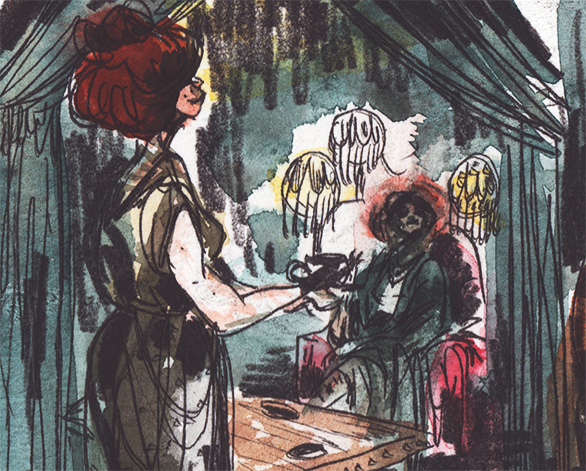 In each SHELTER story we’ll follow a local in trouble, seeking shelter and aid from Mammy and her very special girls to see what path their troubles will take. It’s a world where bright, free futures clash with the old ways and tradition. With stories of city life and vengeful ancient spirits. Of healing witchcraft and the threat of gossip. Of the true meaning of family and  surviving in a patriarchal world.

‘There’s no shame in looking for help but can you pay the price?’

In EARLY DOORS we’ll follow Ealga Culhoun who has fled her life in Ireland and onto the boats for London. She arrives in Shepherds Bush at the tail end of 1969 when the world has begun to move in new directions and all was changing in this pocket of London.

Luckily Ealga has landed on her feet thanks to her British cousin Tommy, who’s set her up with a bedsit and a barmaid’s job at the local pub. For a wee while all seems to be go swimmingly. But soon Ealga learns that everything has it’s cost and finds herself seeking shelter at Mammy Magee’s. Will she be willing to pay the price for Mammy’s help and avenge herself in the process? 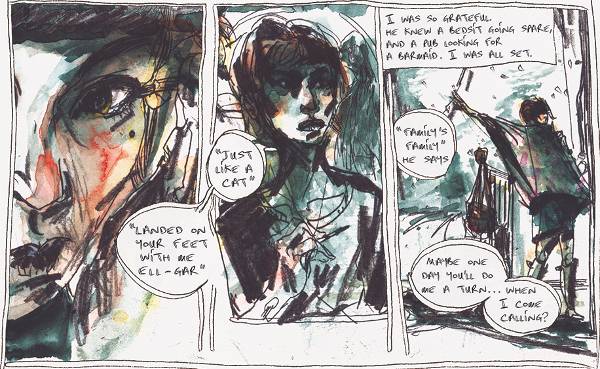 Told over 33 pages of Watercolour and Carbon artwork, EARLY DOORS is fully written with artwork & lettering currently in production. Backers will be part of it’s creation by coming onboard during the production stage and get glimpses into the processes behind the comic. They’ll also be getting a one-oﬀ print run that’s only available through Crowdfundr and (if successful!) myself at conventions.

It’s been very exciting getting the campaign together. All backers of EARLY DOORS will get an exclusive playlist. Print edition backers will also get their name listed in the ‘Thank You’ pages. I’ve lined up some exciting artists to create rewards including Mark Staﬀord (Liphook/ Kangkangee Blues/ CHERUBS) for an A3 fold out poster. A set of 4 ‘Tart Card’ postcards by Ian Banks (Storyboard artist), Sarah Gordon (Viscous Creatures), Russel M. Olson (Gateway City / Skrawl Magazine) & myself. Plus limited copies of BARKING, IND- XED, my HTBAFW zine set and just 5 ‘Brigit’s Fix’ rewards including an original carbon drawing.

I really hope that’s whet your appetite for my new folk-horror tale. If so, please give it a shout out and encourage folk to join my backers and help bring EARLY DOORS to print.

Back the crowdfunding campaign here!