The Pariah monthly picks up where its predecessor left off, taking genetically engineered teens on a quest for survival in low-earth orbit.

And then they were in space, and… Wait, where’s the beginning of this story?

If Pariah #1 seems like it starts abruptly, that’s because this is the first issue of a limited series spinning out of the webcomic-turned-graphic novel Pariah, also in print from Dark Horse Comics. If, like me, you open the cover of this one not knowing that, you’re going to be very, very confused.

The Vitros, in keeping with this sort of sci-fi convention, are a group of genetically advanced teenagers on the run from a world that hates and fears them in equal measure. Trapped on a space station orbiting a planet that wants nothing to do with them, they make the odd decision to return to good ol’ Earth – however they can.

This might seem like a strange choice, but with limited supplies aboard and little hope of providing for themselves in the cold depths of space, they have been left with little option. Framed for an attack on a military lab, they aren’t exactly welcome on their home planet either, but in orbit they’re fighting for their lives against a trap laid before their departure. 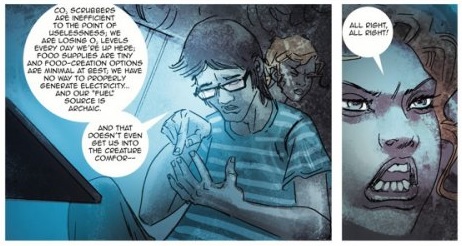 By and large, Pariah reads like something out of a young-adult sci-fi novel, but that’s not to be taken as a criticism. It knows the conventions of its niche, and it fulfills them well.

Co-written by Oscar-winning Shrek producer Aron Warner and Petrograd scribe Philip Gelatt, the story manages to be both entertaining and engaging, and occasionally there are moments clever enough to make the reader forget about the derivative nature of the premise. More notably, the mood of Pariah is unique, combining shades of Lord of the Flies and K. A. Applegate’s Remnants series with a hard-to-define flavor all its own.

Backed up by the illustrations of The Surrogates painter Brett Weldele, Warner and Gelatt have succeeded in crafting a comic that is intriguing, if not quite a stand-out piece of work. It helps, as you’ve probably guessed, to read the Pariah graphic novel before jumping into this mini-series, as the two definitely form two parts of a single story. Come in with no knowledge of preceding events, and you will be lost. That said, if you’re so inclined, and if you don’t mind a bit of a YA flavor in your sci-fi, Pariah is more than worth checking out.