Dynamite Entertainment has provided BF with a first look at Garth Ennis’ Battlefields #6 (Of 6), coming to stores worldwide on May 08, 2013. 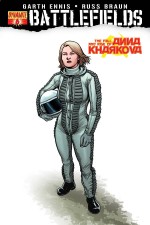 Garth Ennis’ Battlefields #6 (Of 6): The Fall And Rise Of Anna Kharkova Part 3

The year is 1964, and while war hero Anna Kharkova survived WWII intact, she now languishes in a remote Siberian punishment camp. But the former Night Witch still has one last card to play! High above the frozen Arctic ocean, her saga reaches its end, as the last of the women warriors meets her destiny.