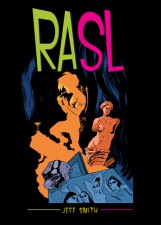 On rereading Rasl, taking in the whole as one chunk rather than short bursts over a number of years, one can confirm what was always suspected: that this is a modern classic.

Rasl was Jeff Smith’s self-publishing follow-up to the phenomenon that was Bone.  Back in the early Nineties, through to the middle of the last decade, Smith was one of the Brat Pack of self-publishers, led by Dave Sim, who were shaking up the comics world.  After Bone, Smith mainly seemed to be concentrating on the business side of things, but then in 2008 he came out with this new ongoing science fiction series.

The story followed the ex-military engineer turned art thief Rasl, who jumps to parallel universes in attempts to steal paintings by the likes of Picasso, but soon finds he is pursued by the government.  As the book goes on we discover that his technology comes from the lost journals of Nikola Tesla.  He bridges the gap between modern physics and history’s most notorious scientist, but his breakthrough comes at a price.

Smith has never been fast but the initial three issues a year schedule meant it became difficult for the series to get any kind of momentum going.  Eventually it did switch to theoretically being bi-monthly but delays on that schedule continued to hinder what was a complex plot.  There was also always a slightly odd structure to the comic; issues would regularly just end without a cliffhanger and then pick up from where they left off last time.  Some would say that’s “writing for the collected edition,” but it also was part of the greatness.  It lead to the issues having a fractured, dream-like quality. The story is told in a narrative of flashbacks, sidetracks into different dimensions and a history of Nikola Tesla.  You’re frequently as disorientated and wrong-footed as Rasl himself by the shifts in time and space.

On rereading Rasl, taking in the whole as one chunk rather than short bursts over a number of years, one can confirm what was always suspected: that this is a modern classic.  The plot, whilst some loose ends are left dangling, is fascinating and compelling.  The deliberately noir tone that Smith employs gives it the timeless quality that he also achieved in the otherworldliness of Bone.  Smith’s art is gorgeous and his sense of timing, so brilliantly shown in the comedic moments of Bone, is here put to use in moments of great tension and excitement.  There’s also an excellent history lesson on Nikola Tesla that runs throughout the middle to latter stages of the book.  These sections are fascinating and often lead to the nicest pages of art.

For those already familiar with the work there are reasons to revisit it.  This new edition is a beautiful thing and a whole lot of love has gone into making it.  Cartoon Books have always delivered great design.  For the purists, a coloured version may jar as much as when they colourised It’s a Wonderful Life, but the black and white over-sized floppy editions are still available so you can go and get those.  Both black and white and colour versions have their charms and there’s certainly room for both on the shelf for anyone who wants to fall in love twice.