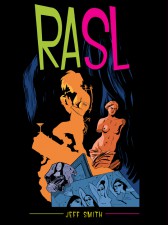 Visit boneville.com to read an excerpt
About RASL:   When Rasl, a thief and ex-military engineer, discovers the lost journals of Nikola Tesla, he bridges the gap between modern physics and history’s most notorious scientist. But his breakthrough comes at a price. In this twisting tale of violence, intrigue, and betrayal, Rasl finds himself in possession of humankind’s greatest and most dangerous secret.
RASL is a gritty, hard-boiled tale of an inter-dimensional art thief caught between dark government forces and the mysterious powers of the universe itself.
About Jeff Smith: Jeff Smith is the New York Times bestselling author/cartoonist of the BONE  and RASL graphic novels.   BONE won numerous awards around the world, including multiple American Eisners and Harveys,  and the French Alph Art.  In 2005, Smith’s work was chosen to launch Graphix, an imprint of Scholastic Books.  Smith is the guest editor of BEST AMERICAN COMICS 2013.