DaYoung Johannson is the eponymous ROCKET GIRL in the new Image Comics graphic novel by Brandon Montclare (HALLOWEEN EVE) and Amy Reeder (HALLOWEEN EVE, Madame Xanadu, Batwoman). She’s a teenage time cop from the jet-pack-packing, flying-car-driving future that science fiction fans dream of, and she’s burst back in time to 1986 to stop Quintim Mechanics from committing a crime against time. The only problem is that once she’s there, Dayoung realizes that her 2013 isn’t even supposed to exist!

With snappy dialogue, endearing characters, and eye-popping art, ROCKET GIRL VOLUME 1: TIMES SQUARED whizzes between two time periods in New York City — gritty, corrupt, big-haired 1986 and shiny, (seemingly) utopian 2013, as DaYoung unravels secrets she didn’t even know she was keeping and faces what it means to grow up when you might not have a future.

“Throughout life there are always going to be hard choices. Growing up is largely seeing that things are complicated and that there are no simple answers,” said writer Montclare. “Rocket Girl plays with that idea; plays the balance between admiring Dayoung’s hard principles and fretting over her naivety.” 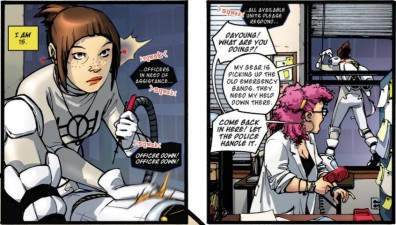 Artist Reeder described her approach to drawing DaYoung in the interview. “She’s got no shortage of courage. And almost too much heart and passion, which is fun to incorporate into a character who at first glance might appear frail or even lacking substance,” she said of the waify protagonist. “So visually it’s turning her from wisp to whip. That’s both in the physical strength that underlies her grace as well as in her quick expressions. Facial expressions are a big deal to me and teenagers are especially great to work with because they are either stifling their thoughts or flying off the handle. Both are extreme, in their own way. So when Dayoung shows any emotion, it’s almost always with her heart on her sleeve.”

While inspired by Back to the Future 2, The Fifth Element, and Akira, ROCKET GIRL is a completely original take on time travel and coming-of-age, a must-read for lovers of adventure, science fiction, and retro-cool alike. Specially priced at just $9.99, the first volume, TIME SQUARED, will be in comic book stores on July 9 and bookstores on July 22.