Published by First Second this September ‘Saving Sunshine’, the graphic novel written by Saadia Faruqi and illustrated by Shazleen Khan, is one of our most anticipated new releases of 2023! We have the cover reveal for you today at BF, alongside the pre-order information.

Saadia Faruqi is the author of the Yasmin series and popular middle-grade novels including Yusuf Azeem Is Not A Hero. Shazleen Khan is the multiple Broken Frontier Award-winning artist behind the popular webcomic series Buuza!! and a frequently featured creator here at BF. Saving Sunshine is recommended for an 8-12 age range and can be pre-ordered from the Macmillan website. 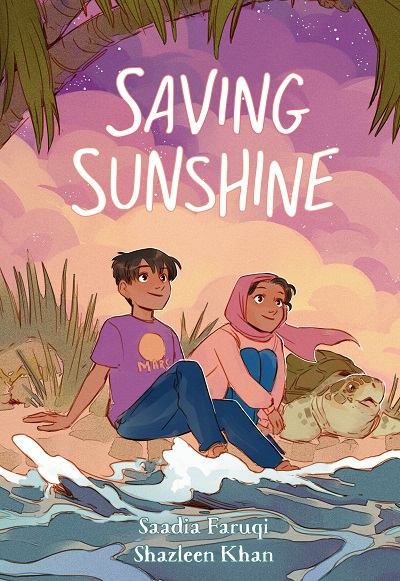 It’s hard enough being a kid without being teased for a funny sounding name or wearing a hijab.


It’s even harder when you’re constantly fighting your sibling—and Zara and Zeeshan really can’t stand each other. During a family trip to Florida, when the bickering, shoving, and insults reach new heights of chaos, their parents sentence them to the worst possible fate— each other’s company! But when the twins find an ailing turtle, it presents a rare opportunity for teamwork—if the two can put their differences aside at last.

Relatable, funny, and heart-wrenchingly honest, Saving Sunshine is the poignant story of Muslim American siblings learning how to build each other up in a world that is too often unkind.