BROKEN FRONTIER AT 20! Back in the day Sean Azzopardi was the very first person I got to know when my comics coverage shifted dramatically from the US genre comics market to UK self-published work. I remember rather nervously turning up at a Comica Comiket in November 2011 and Sean (whose work I’d reviewed for the first time the week before) introducing me to a number of faces on the scene. Anyone who knows Sean knows how important a presence he’s been in UK comics over the years; not simply as a creator but as an organiser, facilitator and champion for the community. For our final ‘Broken Frontier At 20’ interview I chat with the esteemed Mr. Azzopardi about autobio work, building the foundations of a new scene in Hull, and showcasing the work of emerging voices… 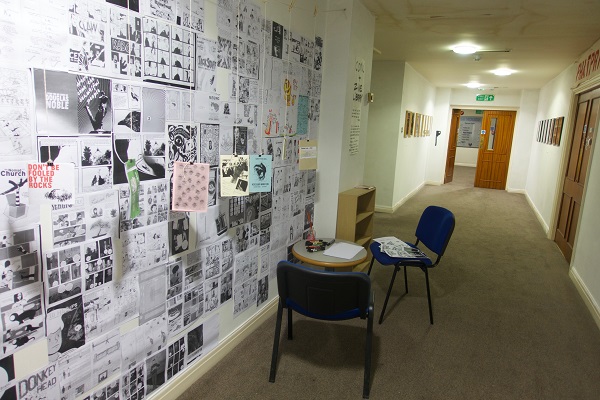 From the ‘Framed’ exhibition in Hull

ANDY OLIVER: I’ve described you on a number of occasions at BF as a true stalwart of the UK indie comics scene. You’ve not just been a prolific creator for the last couple of decades but also an integral part of the community as an organiser, creating opportunities for others through events like the Crouch End Comic Arts Festival (CECAF). How has the small press scene evolved in that time for you in terms of profile, community and opportunities for artists?

SEAN AZZOPARDI: I think there is a weakness of the scene over the last twenty years. Not enough funding for journalists and publications carrying reviews and  interviews. Positive criticism of all aspects of the community, of works produced, how conventions are run and why they becoming too expensive are some talking points that would benefit from scrutiny.

Community growth through conventions, drink and draws and comic shop meetings continues to be a positive area of development. The recognition of the comics medium being applicable to a variety of media has opened up opportunities for creatives. Film, TV, gaming are a few growth areas that embrace comics. 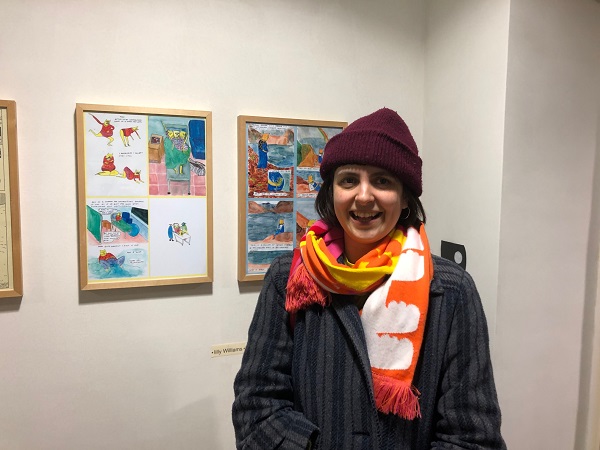 AO: A few years back you moved to Hull and have been working there to create a sense of comics community. Is there a growing comics creative community in Hull?

AZZOPARDI: I’ve made friends with Gareth Sleightholme and Lilly Williams (above) who are excellent cartoonists. But building a community is difficult with a small number of creatives. We tried market stalls and took part in Hull Comic Con. But the audience is more interested in pop culture rather than the source and the creatives and makers. It’s a work in progress and I’ve tried to introduce comics and a visual media through group exhibitions; ‘Framed’ being the most recent example. 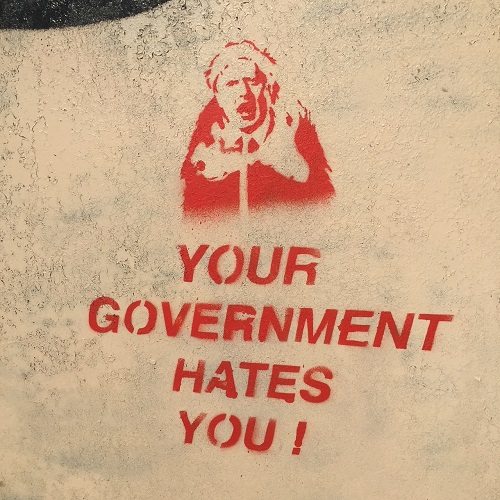 AO: Can you fill us in on some of your artistic endeavours there both inside and outside of comics, and particularly the aforementioned ‘Framed’ exhibition of art from small press voices?

AZZOPARDI: I worked on a new ACE project called ‘Street art and protest – a visual history’. I learnt many street art processes and took to the streets of Hull to test them out. This was through a series of spray and stencil interventions. This could be phrases like “Your government hates you”, to fully realised stencil images applied to walls. I was invited to take part in a year-long mentoring programme at Humber street gallery called ‘Interchange’. The conclusion was a group show and my piece was an installation of screens and figures called ‘Worship’. 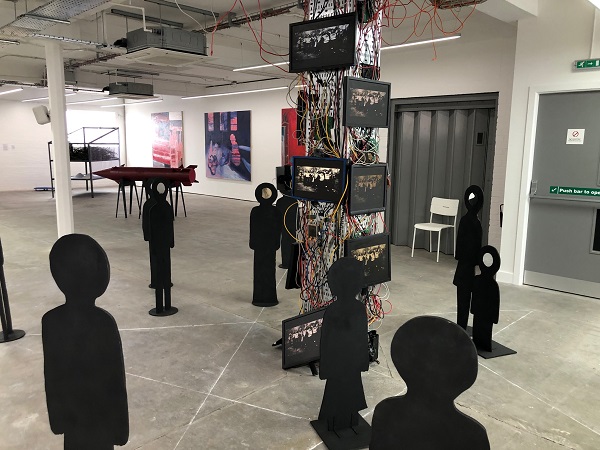 I had some studio space until recently in an office block. I converted the corridor into a gallery named Phatgallery. I wanted to show that comics offered a lot of creative variety so invited 12 cartoonists to send some pages and input together for a show titled ‘Framed’ (below). I also filled one wall with photocopies of self-published comics and set up a drawing zone for children. There was a really positive response by many visitors to the studios. Many people commented that they were unaware that comics could look like this. 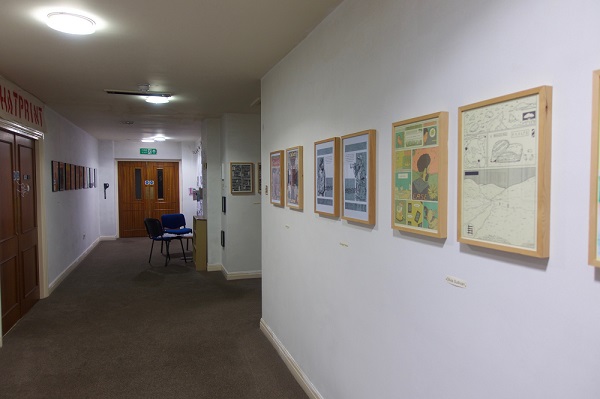 AO: You’re renowned for your honest and forthright autobio comics, and in recent years I think that strand of your practice has produced some truly outstanding work in terms of how you’ve exploited the unique properties of comics to connect with the readers. With that in mind can you tell us about your new comic Once There Was Dancing, and also a little about the Life’s A Party imprint at Strip for Me?

AZZOPARDI: Thanks, Andy. That’s a lovely thing to read. Life’s a Party was a title thought up by Douglas (Noble of Strip for Me). I had been sporadically making autobio comics and it was suggested to group them together and give the series a title and later a uniformity through cover design as well. 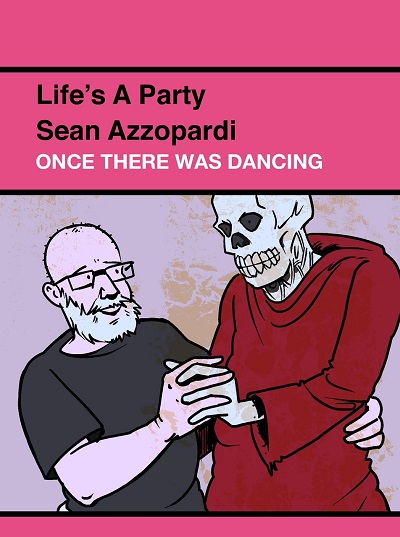 The latest is Once There Was Dancing, a series of connected or not connected tales about one of my regular journeys that somehow go wrong. It loosely ties my book signing at Gosh! Comics to life in Hull and past events in London. It’s one of my favourite of the series as there is a lot more confidence in the narration. That is down to having editorial input from Douglas which afforded a more structured approach.

AO: With Built of Blood and Bricks, the first comic I reviewed in my Small Pressganged column, getting a colour re-release this month there’s something of a full circle feeling here. So I want to ask about your collaborative process with Douglas Noble over the years, and some of the distinctive and very different ways you’ve worked to create graphic narratives?

AZZOPARDI: Images and text. I like collage and often thought that this could work in a Marvel method type approach. So I sent a bunch of sketchbook stuff and text along to Douglas and said see what you can do with it. Blood and Bricks and After the Sessions are two comics that totally used this approach. 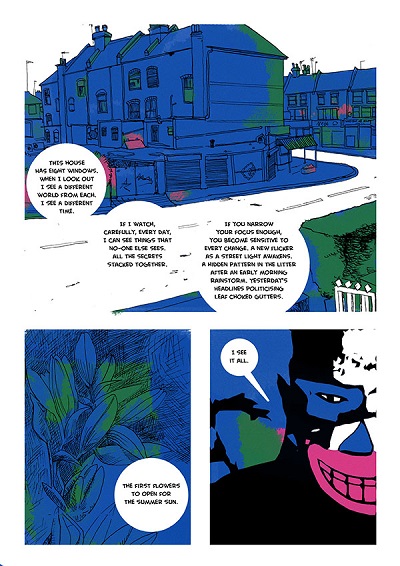 Occasionally I would take the lead with a script. Well, I would send the outline and idea of a script to Douglas who would magically build it up to a completed story. Pirouette and Black Leather are two examples of this.

Faces are a starting point for two works, Blood and Bricks and I Woke Up Like This. Both involved a performative spark, where I would create a face covering (pre-COVID) and take a series of photos and manipulate them, and this would be the starting character.

Script and illustration or traditional approach does happen. Wallace Sendek was close to this and was a wonderful opportunity for experimentation. I really liked this project. A lot of good stuff came from it. AO: While your work has always crossed genres one of your recent projects was something of a departure. How did you get involved with The Sea Shepherd (above) project?

AZZOPARDI: I received a Sea Shepherd hat as a present. Curious I checked them out and immediately wanted to do a piece of work. As a vegan the idea of making a piece of work about environmental and ecological issues really appealed. I contacted the UK branch of the organisation and asked if they would be interested and they said yes. I have to honest here and say that I was hoping for a couple of months at sea to really have the full reportage experience. That didn’t come to fruition so I settled for a lot of research. It wasn’t easy reading or watching. Wildlife being slaughtered and their environment being destroyed is fucking awful.

At the end of the project I got a foreword for the book from Paul Watson, which was excellent as he wrote about being a comic reader. 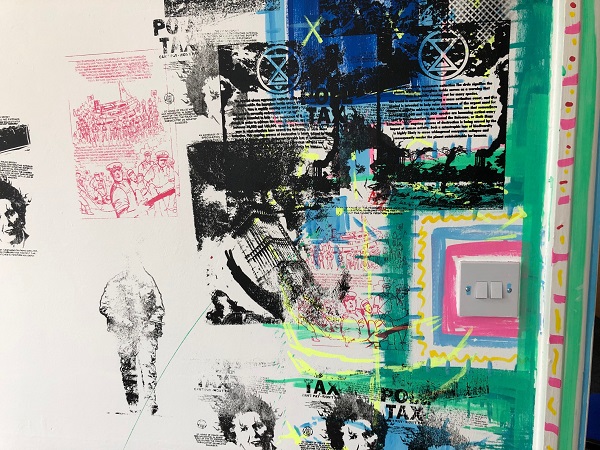 Above and below – Sean’s Street Art project

AZZOPARDI: Diversity and inclusivity. There is always room to do more, but look at the growth of different voices through indie publishing and small press. It’s healthy and positive. 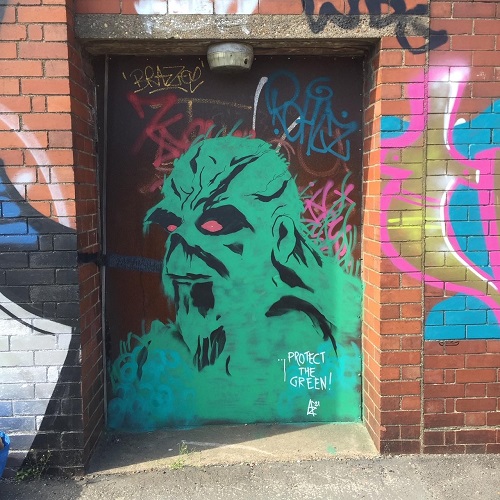