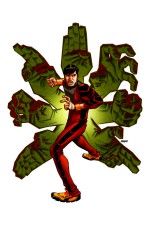 This May, the Master of Kung-Fu returns for an all-new limited series full of murder, mystery and martial arts in DEADLY HANDS OF KUNG-FU #1 – from the creative team of Mike Benson (Deadpool Pulp) and Tan Eng Huat (X-Men Legacy)!

Hero. Teacher. Agent. Avenger. Shang-Chi has been many things. But this time, Marvel Universe’s most impressive hand-to-hand combatant is only one – vengeful! A highly trained MI-6 agent has been murdered in cold blood. One with deep ties to Shang-Chi’s past. As he journey’s to England to pay his respects, he’ll learn not all is as it seems. And if he’s not careful, he’s going to be the next body to drop!

“We’re really pushing Shang-Chi into the spotlight,” says series Editor Jake Thomas. “Here’s a guy who is part Bruce Lee, part James Bond, which seems like a perfect recipe to me! Mike’s written a story that is really going to surprise people, and getting Tan Eng Huat to draw wild kung-fu action sequences is an absolute dream. It’s got both cold, brutal espionage action along with the heart and soul of an old-school kung-fu quest. I could not possible be more excited for this story!”

Old friends and new enemies lie around each and every turn. And Shang-Chi stands alone against scored of deadly foes. Don’t miss a minute of the action when espionage and kung-fu collide this May in DEADLY HANDS OF KUNG FU #1!