Kathryn Briggs’s Story(cycle) was completed as part of her Master of Fine Art degree this year. Ostensibly it’s an examination of the hero archetype as embodied in mythology in Joseph Campbell’s influential work The Hero with a Thousand Faces. Briggs builds on that premise by meshing it with other narrative strands using Campbell’s study of the hero’s journey as a self-portrait of sorts and also as an essay on what it means to be a woman. 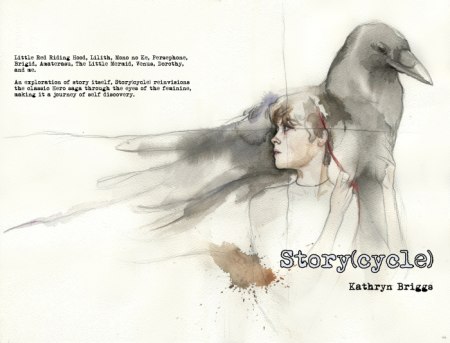 If that sounds ambitious then – and apologies for sounding flippant – that’s probably because it is; what we have here is a metafiction that combines a study of the nature of story itself, autobiography, and social commentary in less than fifty pages. It’s one of the more thought-provoking and pensive pieces of storytelling I’ve covered in this column over the last two years and also one of the most remarkable and expansive uses of the medium to fall under the ‘Small Pressganged’ spotlight in that time.

Taking the key stages of the hero’s tale, as defined by Campbell, Briggs inserts herself into the pages of Story(cycle), sometimes directly, but usually through the use of fictional avatars to represent herself. It all becomes twistingly self-referential as she turns herself into the hero of her own story which is itself simultaneously investigating the very characteristics of that role. And so we observe various mythological and fairy tale favourites as facets of the author working their way through those Campbell-delineated pivotal heroic phases.

This begins with Red Riding Hood answering the the call to adventure and morphing through characters of the likes of Lilith, Mono no ke, Persephone, Brigid, Amaterasu, the Little Mermaid, Venus and Dorothy Gale on the way to a conclusion that is perhaps not an epiphany but certainly symbolises a moment of clarity and self-acceptance; a voyage through womanhood that ends with a sense of balance and recognition. 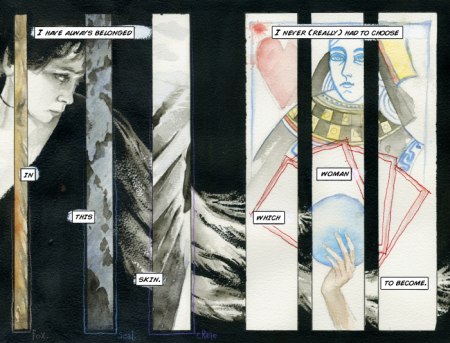 Briggs lays out the steps of this spiritual passage in exquisitely rendered watercolours juxtaposed with the text of both female historical literary figures who weaved social critique into their fiction and contemporary takes on classic tales. Echoes of Dave McKean abound and it’s a technique that allows her audience to both compare and contrast the multiple interlinked themes that make up her narrative; an integration of intent and purpose that gives a beautifully haunting, almost melodious, rhythm to Story(cycle). Using a medium so firmly entrenched in the consciousness of many as a showcase for the exploits of perhaps the ultimate incarnations of the hero archetype adds another subtle layer to the book’s thematic core.

Now that said, and perhaps unsurprisingly given the project’s origins as a piece of academic work, potential readers should approach Story(cycle) as a cross-media experience to get the fullest appreciation of its message. Read the book in conjunction with Kathryn’s detailed blog notes or the video of the installation above. This is a work that feels both deeply personal and yet manifestly universal; the heroic chronicle recreated and re-imagined from a female perspective. In Story(cycle) Briggs has embraced the unique possibilities of the medium to craft a graphic novel that functions on a number of levels. I look forward to seeing how she applies her distinctive creative vision to the comics page in the future.

Story(cycle) is published by Ess Publications and is available priced £10.00 here for a print copy and £3.00 for a digital copy. For more on Kathryn Briggs’s work check out her Story(cycle) website here.