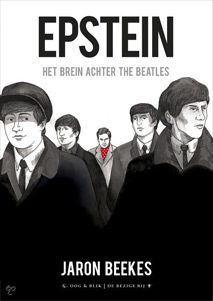 Overdosing at the tender age of 32, Brian Epstein was a middle class working lad who saw an opportunity and tried to follow his dreams. Be careful what you wish for, though, since Epstein ultimately couldn’t deal with the increasing pressure that followed the success of the Beatles, his own homosexual nature in the repressed atmosphere of conservative Sixties Britain and his Jewish heritage. Drinks and drugs ultimately lead to his downfall.

Artist and writer Jaron Beekes – last seen in Crossing Borders with his Spinoza biography – presents Epstein’s life chronologically and in a easy-to-read format in Epstein: The Brain Behind The Beatles. He hits all the high points of Epstein’s life, like introducing a record corner in his father’s furniture shops, starting his own record shop, discovering the Beatles, re-formatting their image and orchestrating their subsequent launch into stardom and even touches upon some controversial issues like the homosexual relationship between Lennon and Epstein. It’s all done rather competently and matter of factly, in a clean and semi-realistic drawing style. 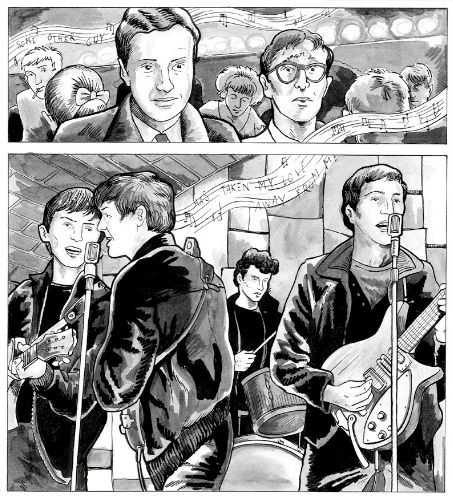 It is a shame then that Beekes’ clean approach to both the story and the visuals does not rub off on the general atmosphere of the book. We don’t really get the feeling that we ‘know’ Brian Epstein after reading this biography. It all feels a bit too much like going through a competently done checklist. The visuals just aren’t terribly exciting either coming off as static with a lot of medium body shots. There’s not a real rhythm to the story and Beekes’ frozen body language approach does nothing to inject some dynamism into the visuals.

While Epstein: The Brain Behind The Beatles is an easy read, it is also a just barely a perfunctory introduction to Brian Epstein the man. Jaron Beekes presents us with a good starting point if you are interested in an absolutely essential and fascinating part of Beatles history but nothing more.

Epstein: The Brain Behind The Beatles is published in Dutch by Oog & Blik. It is a black and white softcover counting 178 pages and retails for €24.90.