Over the past couple of years, more and more high profile creators have been flocking to the creator-owned market. In the last year alone, creators generally known for their mainstream work at the Big Two, such as Greg Rucka and Michael Lark (Lazarus) and Mark Millar and Frank Quitely (Jupiter’s Legacy), have led the charge into this competitive arena telling the stories closest to their hearts.

Crowdfunding sites such as Kickstarter and indiegogo have also changed the landscape of self-publishing, allowing comics creators – upstarts and veterans alike – to test the market and build support for properties that might otherwise not have the resources stacked behind them to reach the shelves of your LCS.

While many of the creator-owned projects we’ve seen over the past year have targeted the stereotypical comics-buying demographic of adult males, Jamal Igle (DC’s The Ray) has taken advantage of the crowdfunding business model to promote and support the evolution of his all-ages wunderkind, Molly Danger.

Much in demand as one of the most accomplished freelancers available, Mr. Igle took time away from his various projects and the promotion of his 10 year old powerhouse’s future, to talk to BF about Molly’s development and future.

Molly Danger has been a work-in-progress for a number of years. What were your goals when you first set out on this journey and 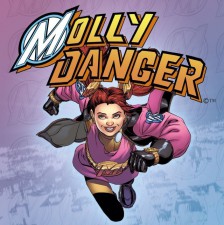 how have they changed over time?

JAMAL IGLE: Well, to be honest, when I first conceived Molly, the project was much more of mercenary effort, less personal. It started as a television animation pitch then became reworked as a comic book project for the sake of expediency.

Over the years, my perspective changed, my life and the circumstances I lived under changed, and as a result Molly changed as a character and the concept changed as a whole. So my personal evolution from a single guy living the way I was, into the husband and father I am now, has informed Molly as much as anything could.

Further along those lines, how has Molly changed as a character over the years and what has surprised you the most about her evolution?

She and the concept itself started out as a much “fluffier” affair. Her power set was fairly nebulous and there was much more of a “through the looking glass” take on her world. Molly was a reflection of my worldview and probably was a bit more cynical as a character. The big change didn’t come until I began reworking the entire concept a few years ago to make Molly a simpler concept to tackle. I started from the premise that she didn’t have a secret identity, or another life that needed to be protected.

Once I figured out where she stood in the world I was creating, it became clear how things had to be structured in Coopersville to allow her to operate freely, or relatively freely. I think what has surprised me about Molly herself in writing her, is how even with all of the controls and protocols set in place to keep her on message, how independent she is. She’s capable of manipulating people in a way I didn’t originally envision. It’s not in a sinister way; it’s very much the way a child can work things to get their way. 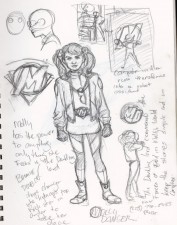 What is it about the creator-owned market that is so attractive right now? Is it simply about creative freedom or is there more to it, than that?

Creative freedom really shouldn’t be discounted but it’s a bit more about leaving something behind that is mine, my view of what can be done in comics. I still freelance for other companies and there’s nothing wrong with that, but working for other companies is just that, work.

Working for big companies like Marvel and DC is about brand management and supporting their intellectual properties. The only true legacy a creator can leave behind is to create something of your own.

This project was funded primarily by Kickstarter. How has crowdfunding changed the comics publishing landscape and how did you benefit from this business model?

I think crowdfunding is great, and it has an affect that I didn’t foresee when I launched my campaign for Molly. It’s almost like market research in a way, instead of taking a survey, people are voting with their pledges. You get to see almost immediately whether or not you have a potential audience for your comic. From a financial standpoint, it allowed me to produce the best quality work I could for Molly, free from the restrictions of having to “fit it in” between other assignments as well.

You’re publishing Molly Danger as a series of four European-style graphic albums. Why did you decide upon this format?

It’s a format I love. It’s a format that I feel needs to be exploited more here in the United States. I really believed if we began to do more work of this type 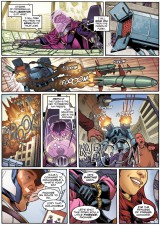 here in the U.S., it would improve the market and the appeal of the comics medium for casual readers.

Most readers were given their first glimpse of Molly in Action Lab’s FCBD sampler. How important was this early exposure to the project and what has the preliminary feedback been like?

Extremely. And when I set out on this process it was the most important early goalpost that I set. I knew I needed that platform to successfully introduce a new concept to readers. The feedback has been amazing, better than I could imagine.

Is this the first time you’ve worn the writer’s hat and if so, what did you find most challenging about the writing process? What were some of the rewards of the dual roles?

It’s not the first thing that I’ve written professionally or the first comic I’ve written but it’s the first in a very long time that I’ve been able to have my name attached to. I think the biggest challenge wasn’t in the writing itself, but in drawing what I wrote. Molly Danger’s script is incredibly dense, and while it’s not an Alan Moore-level script, there were parts where after having a bit of distance I found myself cursing my own name, lol.

You use reference very strongly in your work. Often, when comics lean towards the more realistic, over-reference becomes a valid concern. How did you avoid over-using reference and still achieve such a high level of emotional expression in your characters?

Well to be honest, I think I used much less reference for Molly Danger than I would have for other projects. I think a lot of it is because the characters are so fully formed in my head. As far as facial expressions go, it usually isn’t more than me sitting in front of a mirror or a quick snapshot with my phone. I used more reference when it came to designing the city because I wanted to maintain that realistic look of a small east coast city.

Both Juan Castro and Romulo Fajardo Jr. seem like perfect matches for your artistic style. How picky were you when selecting/recruiting your collaborators and what did they bring to the table creatively?

Rom was easier, since we’ve been working together for almost two years and he’s a fantastic colorist. He was also very open to matching the style I had in my head for the look of the book. Juan was someone I knew through some friends and I had seen the work he was doing over Robert Atkins on G.I. Joe. It was just a matter of opportunity and finding something I could bring him on board for.

Finally, although it seems early to ask, what are your future plans for Molly? Surely, a single four-album series won’t be the last we see of her…?

No, it won’t. I’m already planning books 5-10. This initial series really is the “origin” of who Molly will become. The sky is the limit for her and there is so much further she can go!