Though it struggles with the occasional cliché, The Mercenary Sea delivers an intriguing and expertly illustrated first showing.

Jack Harper is the captain of the Venture, a cargo ship that spends much of its time ferrying supplies between the island nations of the South Pacific, circa 1938. For ex-bootlegger Harper, though, the Venture is much more than a mere merchant boat. Not only does it keep him out of the United States and far from the reach of the Treasury Department, it also may become the first vessel in years to reach the shores of fabled Koji Ra, an island rumored to play host to an array of creatures from time immemorial, immune to the passage of time for millennia.

The premise of The Mercenary Sea is familiar, and much of its cast is made up of timeworn stock characters: A brash young captain dragging his reluctant crew along on a quest for a mythical lost island; a prize fighter on the run from organized crime after refusing to throw a fight; an eyepatch-wearing old sailor whose motives are mysterious and who knows more than he lets on. This isn’t as serious an error as it may have otherwise been – Kel Symons’ dialogue is strong enough in many areas to lessen, or at least camouflage the unoriginal elements, and with the legend of Koji Ra, Symons has laid the groundwork for what could easily become an entertaining, high concept adventure story. 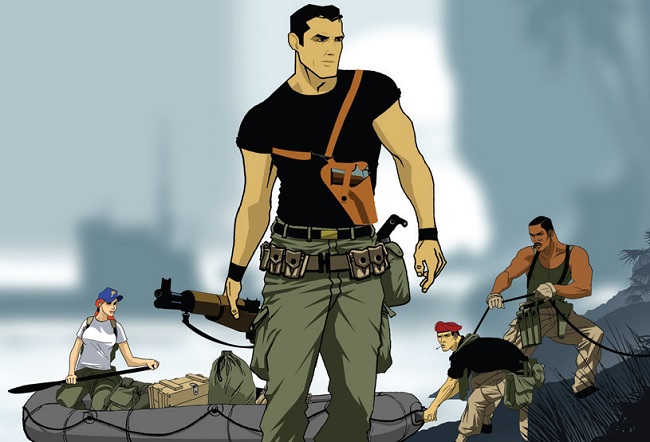 While Symons’ script is sufficiently interesting, if a bit clichéd, Matthew Reynolds’ art is where The Mercenary Sea really shines. Reynolds provides his own colors, and his style is such that it melds color and line almost seamlessly. The shapes are sharp and angular in a way that occasionally evokes the looser work of Frank Miller. The emphasis is on action and rough outlines rather than on fine details. Sometimes this means that the characters blend together, their facial features becoming nearly indistinguishable from one another, but just as often Reynolds’ art is fluid and vibrant, conveying movement and emotion just as effectively as more realistic, detail-oriented styles.

The Mercenary Sea may not be the most original adventure title currently on the shelves, but there’s room for the story to grow, and you could certainly do a lot worse than Matthew Reynolds’ brilliantly moody and energetic art. In any case, this is definitely a comic to watch over the next few months, and you really should give it a shot.