See below for more information or check out the Titan Comics section in the March edition of PREVIEWS – see page 378. 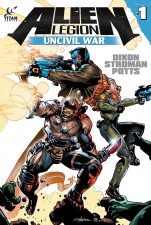 The classic series returns, blasting its way into an all-new battle-scared, laser-ravaged adventure!

This brand-new series brings together the creative giants behind the legendary original Alien Legion stories: Chuck Dixon (Punisher War Journal, Savage Sword of Conan, Batman and the Outsiders) and Carl Potts (The Punisher, The Incredible Hulk) with fantastic art by Larry Stroman! (Wolverine, The Punisher).

“Alien Legion is painted on an immense canvas… The themes and characters have a lot of depth and resonance, and ultimately that’s what storytelling is about.” – Warner Brothers

“Stroman’s pencil drawings, the basis of the finished full color artwork, are wonderful. Without copying the appearance of Anime, he’s mastered the knack of designing whole pages dramatically, and readers won’t feel cheated by minimal text or detail.”
– Publishers Weekly

What if everyone woke up with superpowers – and it was the worst thing in the world?

This morning, divorced plumber Michael Fisher woke up in his crummy one-bedroom apartment in Queens, New York, to find the world had gone crazy. Everybody on planet Earth gained superpowers… apart from him. Now all he wants to do is make it into Manhattan to make sure his estranged son, Josh, is okay. But with giants, zombies and cabbies made of living galaxies thronging the streets, does the most ordinary man alive have a hope in hell?

Meanwhile, America’s leaders try to make sense of the world-changing plague, and what it means for the future of the planet. Now that every country is a superpower, Michael may be the most important man on the planet!

“Imagine a place where everyone has their own unique superpower, and you can tell just from looking at them what that power must be. Imagine a street full of people like that. Then imagine a world. Who else but D’Israeli could draw such a story? Now imagine it done with wit and wonder, and a talking bear, and a bloke who can magic beer out of thin air. Who else but Rob Williams could write it?”
– Garth Ennis

“Rob Williams and D’Israeli are masters of the big picture and the tiny details.”
– Douglas Wolk, author of ‘Reading Comics: How Graphic Novels Work and What They Mean’

“Ordinary is a truly extraordinary experience from two of the greatest creators in British comics.” – Paul Cornell.

A World War II hero, out of place and time, on a mission to find God…Literally!

Simon & Kirby crash into Philip Pullman on the battlefields of the 20th Century in this mythological, military superhero adventure!

Neither Angel or Demon can stand upon the face of the Earth – but in the skin of Man, Heaven and Hell have fought an eternal war.

Only one immortal man can protect humankind – and he’s losing his faith in them!

From magical origins to the fall of Hitler’s Germany, to boots on the ground in Afghanistan and war-torn Iraq, from protests on Wall Street to dread secrets in the Oval Office – witness Blazing Glory’s history-changing first steps into a bigger world!

For more information about these fantastic titles check out the Titan Comics section in the March edition of PREVIEWS – page 378.