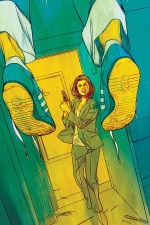 Dynamite proudly announces the upcoming comic book series Control, by Andy Diggle, Angela Cruickshank, and Ben Oliver.  The latest title in Dynamite’s stable of hard-hitting crime comics, Control can be described as an intense police procedural in a politically-charged setting, akin to some of primetime television’s most watched programming.  The husband-and-wife team of Diggle and Cruickshank will share the writing chores for the new series, while Ben Oliver joins Control as the first project with Dynamite.  Control is slated for release in early 2014.

In Control, police detective Kate Burnham finds herself embroiled in a conspiracy that reaches to the upper echelons of the Washington, D.C. power elite.  Powerful forces, both legal and criminal, apply pressure to cover up the truth.  But they’ve underestimated Kate if they think she’s going to fold under the pressure.  Control is a police procedural that examines the top-down application of power by vested interests, from Senator down to street cop, and from the upper echelons of a criminal empire down to the victims at the bottom of the food chain.

Andy Diggle, whose work on Control follows the critical success of his prior Dynamite Crime Line title Uncanny (in addition to his work on such fan-favorite titles as Green Arrow: Year One, Daredevil, Hellblazer, Thunderbolts, and The Losers), provided insight into the workings behind Control‘s creation:  “Police procedurals are massive in film, television, and fiction, but they’ve always been strangely under-represented in comics.  Even the very best of them, like Gotham Central, Powers, and Chew, often have an element of the weird, the supernatural, or the downright spandexy.  With Control, we wanted to write a 100% police procedural, the kind of smart, character-driven, real-world crime drama that rules on TV.  It’s about sex, power, and systems of control… and how the little guys have to game a system that’s rigged against them.  If you like The Wire, Damages, State of Play, or Homeland, then hopefully Control will be just the comic you’ve been waiting for!” 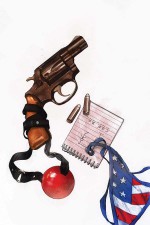 “Power is all about perception,” says Angela Cruickshank.  “I love that moment in The Sopranos when Tony agonizes about what they’re going to do when their teenage daughter realizes they have absolutely zero power over her.  Wealth, looks, friends in high places; these are all great assets for the average power player, but the real key to success is fear.  There’s a popular theory, often trotted out by the media, that ‘if you have nothing to hide, you have nothing to fear.’  Well, who can honestly say that they have nothing to hide?  No skeletons in the closet.  No moment of regret.  No dark little desire, that if only we thought they could get away with it… We wanted to explore the way that control pushes down from the privileged and the powerful and what happens when the people at the bottom start pushing back.”

Artist Ben Oliver says, “Andy Diggle gave me my first professional comics work thirteen years ago when he was then-editor of 2000AD.  We worked together just once in the intervening years when I briefly filled in on a couple of issues of The Losers.  I’m really looking forward to working with Andy, Angela, and Dynamite on Control, and collaborating on a fantastic new story.”

Dynamite’s CEO and Publisher, Nick Barrucci, says, “During our initial discussions, Andy suggested that Angela be part of the Control creative process and join him as co-writer.  I was surprised at the request, but Andy immediately sold me on the fact that Control would be one of the most intense books he’d ever worked on, and having a collaborator would allow greater research and more compelling stories.  It’s clear that this husband-and-wife team absolutely love the genre, and I’d almost imagine that they plant themselves together, surrounded by books, televisions, and computers, on a nightly basis, pouring through everything and watching one cop drama after another!  At the end of the day, the collaboration will create an even better comic series.  I can’t wait to see the fruits of their labors in print!”

Control will be solicited in early 2014 via Diamond Comic Distributors’ Previews catalog, the premiere source of merchandise for the comic book specialty market.  In addition to availability as a printed comic in comic book shops and hobby specialty store, Control will be available for individual customer purchase through digital platforms courtesy of Comixology, iVerse, and Dark Horse Digital.