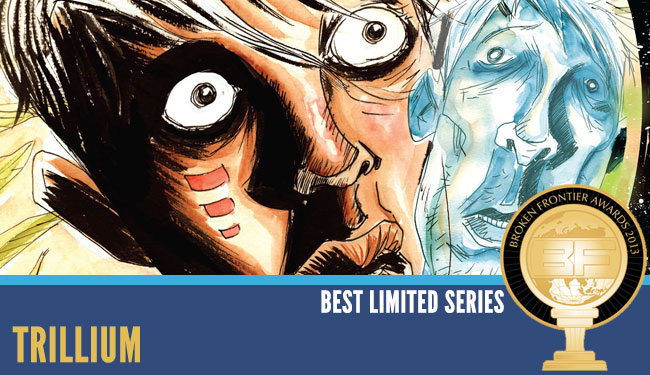 After a shaky start to 2013, the year ends in triumph for Vertigo Comics as Jeff Lemire’s epic sci-fi romance Trillium takes the Broken Frontier Award for Best Limited Series.

For long-time followers of the Vertigo imprint, early 2013 was a time for anxiety. The departure of Karen Berger, the swiping back of key characters into the DC Universe, the second coming of Image and uncertainty about personnel and relocation left a lot of readers worrying that Vertigo was, um, looking over the edge.

However, under new executive editor Shelly Bond, the imprint came out swinging as the year went on, and one of its acclaimed launches, Jeff Lemire’s Trillium, has been voted Best Limited Series of 2013 by the readers and staff of Broken Frontier.

I’ve been a huge fan of Jeff Lemire for years, and even though I can’t begrudge him the opportunity to keep spaghetti hoops on the table with a hefty slate of DCU writing gigs, it’s his creator-owned writer-artist work that really gets my heart beating a little faster.

After the emotionally charged post-apocalyptic drama of his last Vertigo series, Sweet Tooth (2009-13), Lemire has nailed his sci-fi colours more firmly to the mast with Trillium, an ambitious eight-parter that – like Scott Snyder and Sean Murphy’s The Wake, from the same publisher – spans the millennia to look at the BIG picture of human development.

From its first issue, released in August, Trillium set off like a train, taking the comic-book format and giving it a good twist to bring two disparate stories and characters together; #1 famously used the double-cover flip book format to tell two stories that meet in the middle.

From one end we were taken to 1921 and introduced to a typically haunted Lemire protagonist – William, a traumatised British veteran of the Great War, exploring the jungles of Latin America for the lost Temple of the Incas.

From the other end we were flung forward to 3797 to meet ‘Xeniologist’ Dr Nika Temsmith and see her negotiations with a native alien race for supplies of the Trillium – a plant that might save the last few thousand human space colonists from an annihilating plague known as The Caul.

Before long, the fates of William, Nika and humanity in general become inextricably entwined. The pace picks up and the stakes rise until, at the midpoint of the series, we’re faced with a Watchmen #11-style white-out and a caption announcing ‘The End’. Then, in #5, one of the most intriguing single issues I can remember, things get REALLY interesting…

Lemire’s expressionistic artwork has always enthralled me, but he’s taken his style a step further in Trillium; maybe inspired by his friend Matt Kindt (Mind MGMT), he’s started to add ethereal watercolours to his work, adding an extra layer of atmosphere.

Apart from the hold exerted by the main story, the cliffhangers at the end of each issue and formal experimentation Lemire employs makes Trillium a thrilling monthly experience. As well as the flipbook aspect of #1 – which makes a return throughout the series – the difficulty of communication between the various parties is depicted vividly, including a language of alien glyphs that cries out to be ‘decoded’.

Indeed, the whole thing reads like a bit of a paean to the slightly unfashionable ‘floppy’; as in Mind MGMT, there’s plenty of stuff in the single issues that won’t work half as well digitally, or even in trade paperback format.

So, as we head eagerly towards the story’s conclusion, hats off to Vertigo and congratulations to Jeff Lemire for Trillium – Broken Frontier’s Best Mini-Series of 2013.