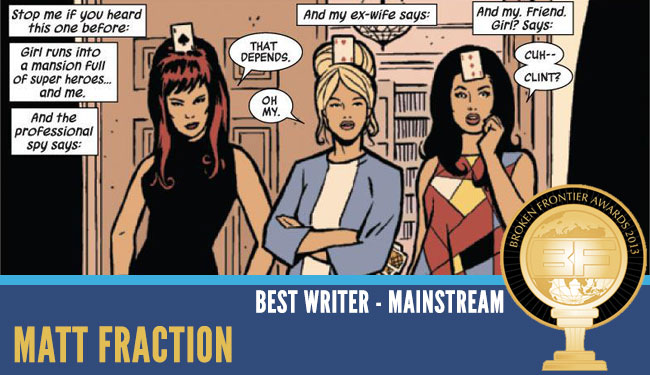 (Im)perfectionist, we love Matt Fraction’s Hawkeye, warts and all

Matt Fraction has been pushing the boundaries in mainstream comics for years. Even after the label became synonymous with Big Two event comics, Fraction has always found a way to stay creatively relevant, developing characters and titles by setting them squarely outside of their traditional comfort zones.

His critically-acclaimed runs on The Immortal Iron Fist and The Uncanny X-Men presented fans with new and insightful takes on properties many thought drained of originality long ago. It should come as no surprise then, that Fraction, once again teamed with the inimitable David Aja, finds himself at the vanguard of mainstream comics writers with Marvel Comics’ Hawkeye ongoing.

Although set firmly within Marvel’s primary 616 Universe, Fraction’s take on fan-favorite Clint Barton focuses shrewdly on characterization, grounding the property in the everday. This is a “Hawkguy” with real problems, problems anybody who’s in a relationship, pays rent, and has nosy neighbors can relate to very easily just by reviewing their day. What Fraction does in Hawkeye is nothing new, really. He’s not reinventing the wheel. After all, didn’t Stan and Steve make us care about a certain young man named Peter Parker, flaws and all, when the Silver Age first exploded in the popular imagination?

Fraction’s Hawkeye gets hurt – physically and emotionally. He gets knocked unconscious on a regular basis. His face usually bears a band-aid or ten. His bones break with disturbing frequency. And let’s not forget the real danger: Barton’s fascination with women who usually end up wanting to kill him. It’s a wonder the man survives 22 action-packed pages every month. Even his dog can’t stand him. Through it all though, Fraction reminds us this is the Hawkeye that always was. 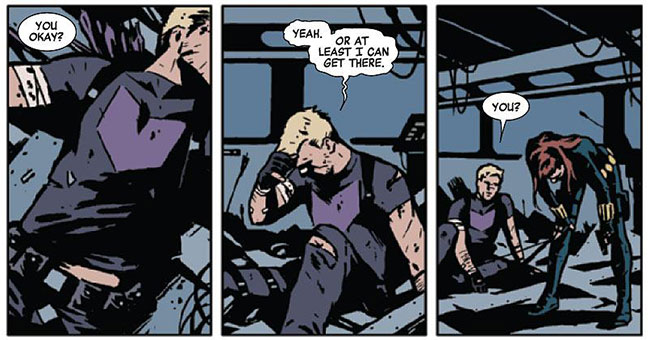 Despite his dazzling storytelling tricks and David Aja’s stylish graphics, Fraction never veers away from the core of the character. The arrow he’s loosed on the comics world flies straight and true to the heart of Hawkeye’s humble beginnings, each issue reminding us this is a man, first and foremost. He’s not a god or even a super-soldier. He ain’t no genius either. He’s got a bit of a stash (but let’s not get into where all that coin actually came from). True to his roots as a roguish carny with a heart of gold, not an issue of Hawkeye closes without Barton coming to terms with his imperfections and inadequacies. Whether he’s fighting the good fight or fighting with the latest femme fatale out for his family jewels, Fraction’s Hawkguy is someone we can all relate to.

We all love the underdog. That’s what made Peter Parker resonate with so many fans in ways Steve Rogers and Tony Stark never could. Fraction’s Hawkeye is the next logical step in the evolution of the modern superhero, written for a more sophisticated audience, who while they still pine for the action-packed adventures of costumed vigilantes, want to see themselves in their heroes more than ever before. That means sometimes we like to see our heroes mess up. In this, Clint Barton is relentless. He can’t stop trying to do the right thing – even when it gets him in trouble.

That, more than anything else, makes Hawkeye a true hero of our time and Matt Fraction Broken Frontier’s Best Mainstream Writer of 2013.