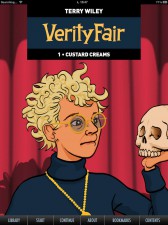 Press Release
SEQUENTIAL – the literary graphic novel iPad app, is having a special promotion on Graphic Novels from Britain, as part of which we’re reducing the price of acclaimed graphic novel VerityFair by Terry Wiley from $9.99 to just 99 cents (69p!) until the end of September.
Rich Johnston of Bleeding Cool called Terry “a true comic book genius” and Q Magazine called VerityFair “An exhilarating comedy-drama… One of the best of today’s comedies in any medium.” The 156-page VerityFair graphic novel is presented in SEQUENTIAL’s deluxe digital graphic novel format and includes one of the best audio commentaries you’ll hear, as well as a revealing interview, production sketches, extra strips and more.
VerityFair is a quintessentially British graphic novel — try it, and if you like it, you’ll know you’re an anglophile, at least where comics are concerned!
As well as VerityFair and work by  British greats Alan Moore, Brian Bolland, Bryan Talbot, Eddie Campbell and Hunt Emerson, SEQUENTIAL features free indie comics, such as Britain’s OFF LIFE, and work by British talents Robert M. Ball, Darryl Cunningham, Dan Berry, Marc Ellerby, Adam Cadwell, John Riordan, Corban Wilkin, Sally Jane Thompson and Oliver East. 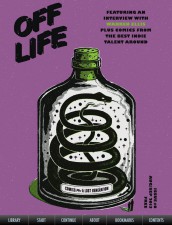 British publishers on SEQUENTIAL include: Blank Slate, Myriad Editions, Jonathan Cape, Knockabout and Great Beast.
British comics is undergoing an exciting renaissance and SEQUENTIAL is the place for a US and international audience to see what all the fuss is about. Whilst doing so, don’t forget to check out the BRILLIANT “Days of the Bagnold Summer” nominated for one of the UK’s most important literary prizes this year – the Costa Literary Awards.
Download SEQUENTIAL for iPad — for  free — here:
https://itunes.apple.com/us/app/sequential-digital-graphic/id629759394?mt=8