BROKEN FRONTIER AT 20! Hold the birthday wishes until Friday when we will officially hit our big anniversary milestone but this week sees the beginning of our celebration of two decades of Broken Frontier!

I will have much more to say about that landmark point in BF’s history at the end of the week. Over the next fortnight though expect to see a number of special interviews, features and reviews tying into the festivities. Each of them will be marked as ‘BROKEN FRONTIER AT 20’ articles bearing the above logo by the incomparable Joe Stone with a brief intro as to why their subject matter is of importance in the greater picture of BF’s history. They will be running right up to November 4th (at which point we will seamlessly move onto our Thought Bubble coverage).

While we can’t have the big, in-person, real world event(s) I had always planned for our 20th at least we can do our little bit on the site to continue our ethos of championing deserving voices in comics. Don’t forget we’re still looking for your brief thoughts on a Broken Frontier-featured artist you discovered via the site for a round-up piece next week. Details here if you would like to contribute.

In the meantime enjoy what we have in store for you over the next two weeks as we explore the comics universe with a distinctly celebratory vibe! 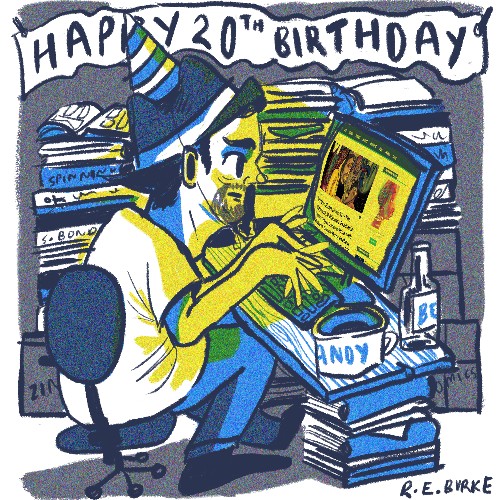