BROKEN FRONTIER AT 20! When planning our Broken Frontier 20th anniversary coverage one strand seemed absolutely key – the artists who have made up our several generations of our ‘Six Creators to Watch‘ annual initiative. Throughout the two weeks of ‘BF at 20’ we will be running creator commentaries from 6 to Watch-ers giving them an opportunity to elaborate on and discuss their creative process. On Monday Danny Noble spoke about her graphic memoir Shame Pudding here and today Sammy Ward, one of our current #BF6toWatch batch, explores her atmospheric horror comics work.

Our Inside Look feature at Broken Frontier provides creators with the opportunity to share exclusive commentaries on their comics projects with our readers, giving insights into the genesis, process and themes of their work. It’s one of the oldest regular features at BF, first appearing on the site back in the mid-2000s and also one of our most well-received. Today Sammy Ward talks The Deeper You Go Into the King’s Wood… Last summer I would go on walks everyday and explore new trails in my local area, one of those trails was in the King’s Wood. It was by accident that I found these woods and when I first entered it I was truly enchanted. The thick trees, the blue skies and sunlight peeking through, I couldn’t believe this place had been so close to me and I had only just discovered it. The further I walked in however I couldn’t help but feel a little uneasy as the trail narrowed and the surrounding shrubbery thickened. It took me downhill into darker territory. I soon became very self aware. A woman alone in the woods, no one knew I was even there. As enthralled as I was discovering this new patch of nature I also had growing anxiety being so alone in such a secluded area. It was this feeling that inspired The Deeper You Go Into The King’s Wood.

I wanted to begin the story with an idyllic scene, establishing the enchanting woods, open and light. I’ve always liked to think of butterflies as a good omen, letting you know that wherever you are in that moment is where you’re meant to be. These first panels show the character’s POV as they let the butterflies guide them into the woods with a sense of safety and security. Without any text or a character to guide the eye I use the butterflies to give the sense that someone is in motion, walking deeper through the woods. I think having the characters POV in the first two pages allows the reader to first get a sense of the environment and surroundings. 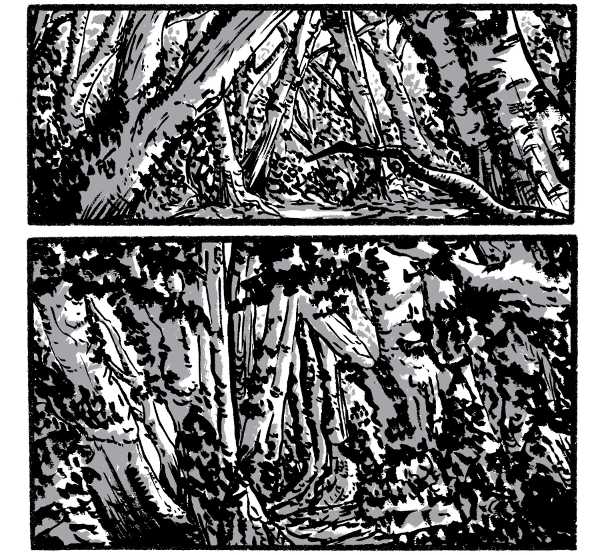 The Deeper You Go Into The King’s Wood is a very short story and I wanted to get across the emotional ups and downs that the character goes through. I very quickly contrast the next page from the first as the scene becomes crowded and darker as the trees close in. Whilst inking these pages my lines become thicker and more erratic, it’s darker with less space. I wanted to give a sense of uneasiness and foreboding quite early, just as in reality the feeling can creep up on you unexpectedly.

I don’t want to give any spoilers for the story but I want to show how the story descends into danger. This is where my love for folklore, nature’s omens and symbolism comes in. The cawing of a crow is a sign of danger but also possibly the cause of our main character falling down. This is where I decide to show the main character for the first time. We don’t even know who she is but we understand she’s alone in these woods, except for the creatures who disregard her. She’s rather vulnerable at this moment. I gave these panels a black background to really give a sense of the woods closing in on her. This changes throughout the story to fit with how the character is feeling. If there is a moment of respite it will be lighter and more open but there is always a feeling of dread present too. 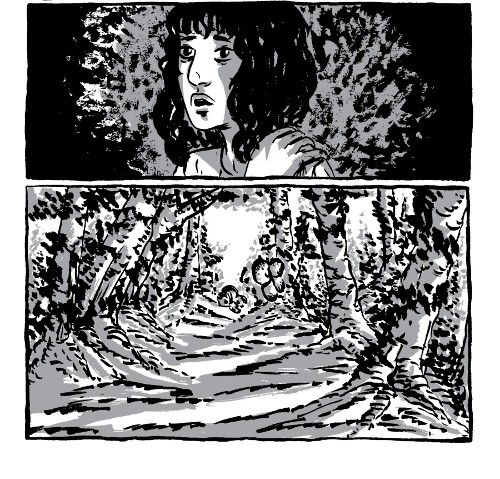 These panels are two of my favourites, they’re simple but convey how our main character is feeling scared. In this moment she’s seeking an escape and sees the butterflies return with hope of following them to a clearing and a way out of the woods. Again this is without spoilers so the really unnerving parts can remain fresh and fun when you read it. I really wanted to create my own folktale in this story, building an ancient presence within the King’s Wood but letting the woods itself really create the tension and suspense.

Tags: broken frontier at 20inside looksammy wardthe deeper you go into the king's wood