Our Inside Look feature at Broken Frontier provides creators with the opportunity to share exclusive commentaries on their comics projects with our readers, giving insights into the genesis, process and themes of their work. It’s one of the oldest regular features at BF, first appearing on the site back in the mid-2000s and also one of our most well-received. The first of our Inside Looks for 2023 comes from Will Betke-Brunswick, whose debut graphic memoir A Pros and Cons List for Strong Feelings was published at the end of last year. Here’s publisher Tin House’s description of the book, with Will’s engaging commentary following!

An unexpected and poignant debut graphic memoir about a close-knit family approaching loss, and the wonder and joy they create along the way. 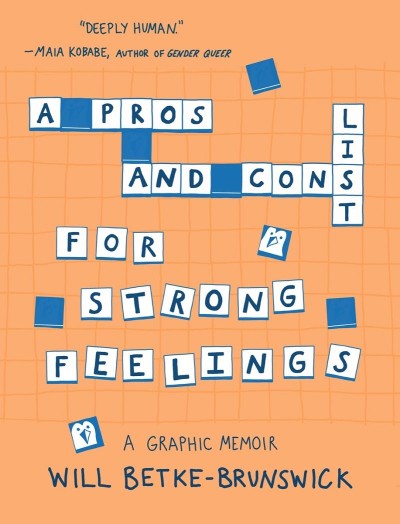 During Will Betke-Brunswick’s sophomore year of college, their beloved mother, Elizabeth, is diagnosed with an aggressive form of cancer. They only have ten more months together, which Will documents in evocative two-color illustrations. But as we follow Will and their mom through chemo and hospital visits, their time together is buoyed by laughter, jigsaw puzzles, modern art, and vegan BLTs. In a delightful twist, Will portrays their family as penguins, and their friends are cast as a menagerie of birds. In between therapy and bedside chats, they navigate uniquely human challenges, as Will prepares for math exams, comes out as genderqueer, and negotiates familial tension.

A Pros and Cons List for Strong Feelings is an act of loving others and loving oneself, offering a story of coming-of-age, illness, death, and life that announces the arrival of a talented storyteller in Will Betke-Brunswick. At its heart, Will’s story is a celebration of a mother-child relationship filled with unconditional devotion, humor, care, and openness.

A Pros and Cons List for Strong Feelings is my debut graphic memoir, which meant that I was figuring out how to create a graphic novel for the first time. I knew I wanted to tell the love story of my relationship with my mom, and frame it in the ten months between her stage IV cancer diagnosis and her death. But I really didn’t know how to make it happen, and needed to figure out my process for making a book.

To create my first drafts, I tried scripting, then thumbnailing with my own commentary in the margins. Finally, I just wrote pages in pen, redrawing images and speech bubbles on new sheets of paper, cutting them out, and taping them on top. Scripting took away the excitement and visual play of creating a page. Adding commentary gave me instructions for later, but I wanted to figure it all out NOW. I think the destruction and construction of cutting and taping helped me physically make the book.

Three early drafts. The first was a script, then annotated thumbnails, then cut and paste.

The book begins with a story about a middle school soccer teammate ditching me and my mom for a carpool that listened to the radio. This was the first story I wrote for the book, and the only story that I originally wrote with human characters. The second story I drafted was the day my mom died, and I couldn’t draw her as a dead human. The penguins gave me a way to separate myself from my grief a little bit, and they were so fun to draw. I was freed from gendered expectations as I wrote about coming out as genderqueer. And I was freed from mammalian facial expressions and expressions of cuteness, instead preferring beak tilts and flippers flapping.

The first draft of the first story of the book, with humans (top) and the final draft of the same four pages (bottom).

Apparently at some point, though I don’t remember actually doing this, I went back and drew a few crucial scenes with human faces just to check it out. I convinced myself penguins were the right choice. 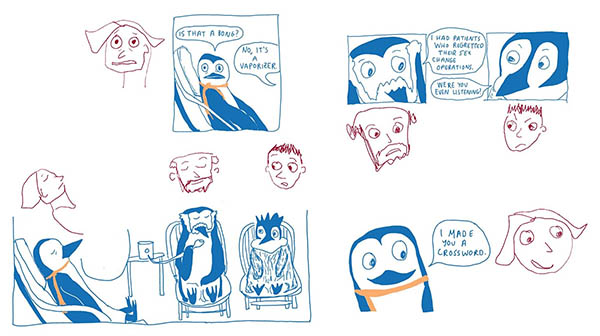 After a deep dive sketching penguin skeletons, I was excited about the three penguin flipper bones turning into an upper arm, forearm and wrist. The character design changed gradually. I gave up on the segmented arms when I realized that I wasn’t drawing them in my first sketches and drafts. I would go back and add the structure, but thought the original sketch actually looked better. The eyes turned from dot eyes into dots with upper lids into the final round eyes with pupils. I could then show what each character was looking at, and my favorite, I could roll my eyes with frustration. 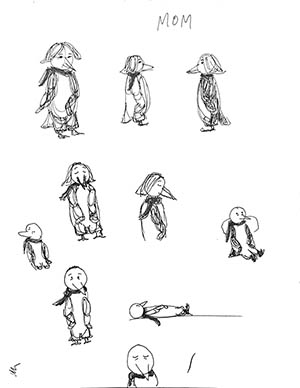 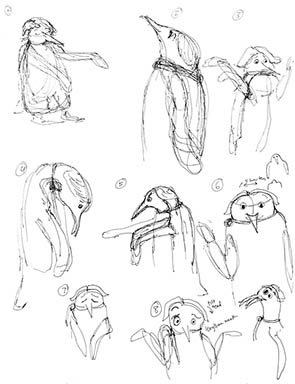 Character sheets, as I was experimenting with eyes, flippers, and head shape.

Including a second timeline was probably the most difficult part of creating the book. I needed to fill out my relationship with my mom, but suddenly I wasn’t constrained by the ten months she was sick. I wanted to capture everything about our relationship and was also devastated by the idea that I wouldn’t actually have enough memories of my mom. What if I could only remember the time she was sick? I created my own constraints to help access the memories. I looked for times with my mom that connected to the themes already present in the book– art, gender, and math.

I also had to be willing to go back in time and hang out with her. I had spent significant time going over the ten months she was dying, but since her death I had spent less time just imagining her alive. I ended up with more memories and pages than I wanted to include. These flashbacks were originally not in the blue and orange of the rest of the book, and I am very glad my Tin House editors suggested abandoning the brown. I wanted to completely rearrange the flashbacks twice throughout the book process, but again, my editors came through to direct them to be in their loosely chronological yet still magical final order. 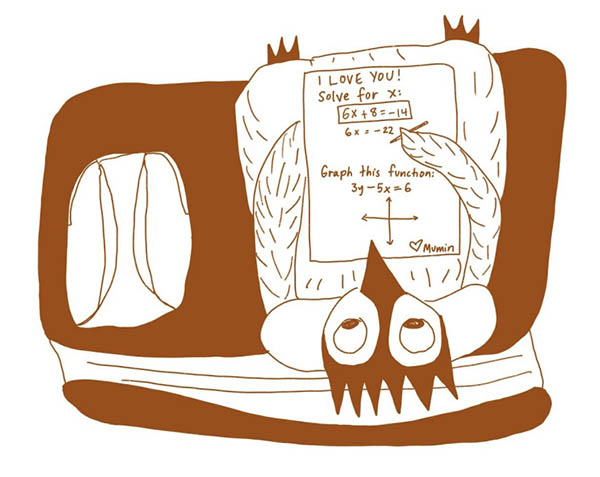 One of my favorite flashbacks in its original brown.

Here’s A Pros and Cons List for creating your first graphic memoir. I hope it helps.