An Aurora Grimeon Story: Will O’ The Wisp

If a horror master like Steve Niles calls your book fun and unexpected, you know you’ve got something special on your hands. That’s what Archaia thinks as well, as it’s kicking off its first full year under the BOOM! Studios umbrella with the release of Will O’ The Wisp.

Created by new voices Tom Hammock and Megan Hutchison, Will O’ The Wisp revolves around a young orphan girl named Aurora Grimeon, who gets sent to live with her grandfather following her parents’ death. Too bad for Aurora that a) she’s never met the man, b) he happens to live in a huge mansion pulled straight from an Edgar Allan Poe story and c) the house stands on a deserted island out in the swamps where everybody’s letting themselves in with Hoodoo magic. Not the best place to get to know one another.

For fans of the aforementioned Mr. Poe, Tim Burton’s Corpse Bride and Ted Naifeh’s Courtney Crumrin. Also, have a look at our Comic of the Week page to watch the trailer of the book. 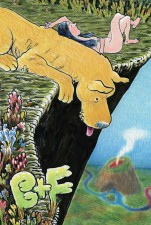 The original edition of B+F, by New York-based cartoonist Gregory Benton, was an oversized, handmade thing of beauty that was limited to 50 copies and won the Award of Excellence at the MoCCA Arts Fest in New York. Fortunately, Chris Pitzer of AdHouse Books was on a nearby table, and now he and French publisher Éditions çà et là are putting out an expanded edition of the book.

The 64-page hardback is a wordless, free-flowing tale following a woman (‘F’) and a dog (‘B’) as they make their way through a weird alien landscape, depicted in the artist’s lavish, colourful style. Benton puts his characters through a fable that’s both dreamlike and nightmarish, and the whole thing is likely to be as lovely a package as you’d expect from AdHouse.

Marvel made a wise decision hiring one of the best espionage writers in the comics field to helm their new Black Widow series. Nathan Edmondson has more than proven he’s got a knack for the genre on stories like The Activity, Dancer and Who Is Jake Ellis?, which means Natasha Romanoff is in very good hands going forward.

This book may also prove to be Edmonson’s breakthrough book with the public at large: Black Widow’s popularity is at an all-time high and that will only continue as she’s featured extensively in Captain America: The Winter Soldier, which hits theatres this Spring. And with Phil Noto on art, you’ll know that she’ll look as good in the book as Scarlett Johansson does on the silver screen. 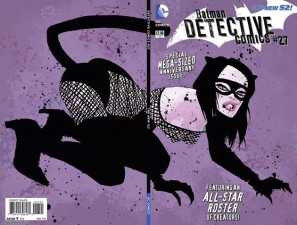 A lot of special issues carry heavy price tags and aren’t very special. Luckily, Detective Comics #27 isn’t one of those. Yes, at $7.99, this oversized issue has a heavy price—but that’s backed up by a brilliant all-star lineup of noted Batman creators, including a retelling of his origin by writer Brad Meltzer and artist Bryan Hitch and other original tales by Scott Snyder and Sean Murphy, Peter J. Tomasi and Guillem March, Paul Dini and Dustin Nguyen, Gregg Hurwitz and Neal Adams.

This mega anniversary issue will be the one comic you take to cons this year and not mind the long lines as you collect autographs.

This book drew me in because of the creative team alone. I’ve long since thought that Stefano Caselli’s work hasn’t gotten the praise it deserves as few mainstream artists can capture the dynamic energy the way he does panel to panel. Add in current Avengers architect, Jonathan Hickman and Secret Avengers mastermind, Nick Spencer, and Avengers World becomes a fairly delicious recipe.

Universe-ending wars across space and time are fine and all but I’ve always felt that the Avengers are at their best facing off against planet-ending threats right here on Earth. Those stories more than any others give the writer the opportunity to explore who the characters are and creative a lively and complicated group dynamic in addition to delivering knock down drag out fights. And isn’t that what we come to team books for in the first place?

Best described as a sci-fi slice of life comic, Brandon Graham once more steps into his own special breed of far-out science fiction filled with weird ideas, idiosyncratic humor and engaging characters. This trade paperback collects the miniseries From Alphabet to Infinity and the out-of-print one shots The Fall and Elevator, tracing Sexica’s origin back to the artist’s time working on adult comics.

Peter David’s last run on X-Factor made it one of my favorite titles of all time. Starring anything but big-time Marvel characters, David’s characterization of this off-beat group of misfits endeared them to the audience in a way that few mainstream authors bother to attempt. They dealt with superhero drama and world ending crises, but at the same time also interacted with each other in a very human way. But like all good things, it had to end.

Now, David assembles another off-beat group of mutants, but this time packs it with one-time popular heavy hitters who’ve since shrank away from the forefront of mutant consciousness, leaving David free to play with some new toys in interesting ways.

The start of 2014 also marks the beginning of Marvel’s transition from Marvel NOW! to All-New Marvel NOW!. To celebrate, Marvel is releasing this special issue to preview a number of their new upcoming titles.

Now admittedly, the $6 price tag for a set of previews is ridiculous, but this one-shot is at least worth a flip through to get a sneak peak at a number of exciting new titles. Avengers World, Black Widow, and All-New Invaders all look to be various degrees of interesting. What I’m really excited about though is the chance to get a first look at Loki: Agent of Asgard and Silver Surfer. These two books have some real appeal for Broken Frontier readers because of the quality of the creators and concepts involved. I think they have the potential to be sleeper hits, like FF and Young Avengers were when those books were published in last year’s Point One issue.

At the mercy of the Toymaster and Mogul, Superman and Batman are pitted against each other in a brawl that started last issue.

After an all-action issue, fans are hoping that with #7 writer Greg Pak moves this second story arc back around to the teamwork and mutual respect that makes two of DC’s franchise heroes worthy of their title as the world’s finest. And as an added visual treat, the issue continues in widescreen format.

Fan-favorite French artist Richard Isanove (late of Marvel’s The Dark Tower adaptations and colors on Marvel 1602) takes up writing duties for everyone’s favorite razor-clawed mutant. With Wolverine running contraband liquor across the US/Canada border at the height of the Great Depression, things are bound to get complicated for the Ol’ Canucklehead before too long. This time, trouble comes in the form of a band of children orphaned by organized crime, and as you might have guessed, Wolverine won’t be able to resist slicing and dicing a few mobsters.

Peering into Logan’s past, Isanove promises to take Savage Wolverine in a bold new direction for the new year, and the strength of his art alone makes this issue a must-read.