Photojournalist Savannah Loy is missing. When private detective Ira Avery is hired to find her, he soon discovers there’s much more to this missing person case than he ever expected. There’s something big he cannot see, something bearing down on the entire city of San Hannibal, Calif.
Created by Dan Schkade and JD Faith, San Hannibal is a retro-futuristic, hard-boiled crime graphic novel told in five parts, whose first chapter will debut April 16. Featuring a look and feel unlike anything else on the market — call it “neon noir” — San Hannibal is as visually daring as it is entirely engrossing. It follows Avery through his dealings with thugs, a makeshift rock star and pagan ritualists as he uncovers a conspiracy that reaches all the way up to San Hannibal’s political elite.
Derek Royal of the Comics Alternative Podcast says the “neon intensity” of the artwork underscores “a noir tone. It’s like a harsh light has been cast on the subject matter, distorting appearances and affecting the way that Avery sees the world surrounding his missing journalist.” And Greg Burgas of Comics Should Be Good! cites the first issue as “a good start to a mystery,” calling San Hannibal “a very cool-looking comic” that “complements Schkade’s terse script very well.” 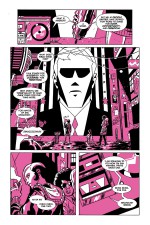 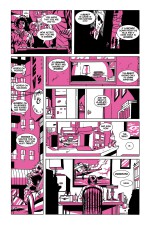 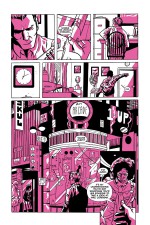 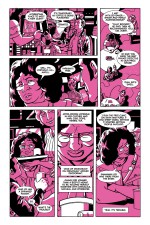 Schkade, himself a talented draftsman, writes and/or draws the web-based comics The Fowl and The Adventures of Stop and Go at thecommitteebuilding.com. Faith created the superhero webcomic Acrobat and illustrates the coming-of-age sci-fi thriller Just Another Sheep at justanothersheep.com.
San Hannibal #1 can be pre-ordered now from the February issue of Previews (Diamond Code FEB141403) and will be available in stores for $2.99 on April 16. To find a comic book retailer near you, call 1-888-COMIC-BOOK or visit comicshoplocator.com.