What’s to be done with John Constantine? In the almost forty years since his debut, we’ve weathered seemingly every possible permutation of the Hellblazer. He’s been a Sting-styled occult foil to Thatcher’s Britain, a manipulative anti-hero, and a member of a monster-filled Justice League spin-off. He even quit the fags for that last one. He’s been portrayed by a Welshman, a black-haired yank, and a former Doctor’s assistant. Each evolution maintains the basic tenets of the character — an incorrigible scoundrel, albeit with a heart of…semi-precious metal, at least, as skilled in the dark arts as he is in talking his way into and out of trouble. There’s nonetheless been an undeniable sanding off of rough edges along the way. Potty mouth gone PG. The magic resembling Potter more than Crowley. The “anti” of “anti-hero” being conveniently misplaced before a company-wide crossover. 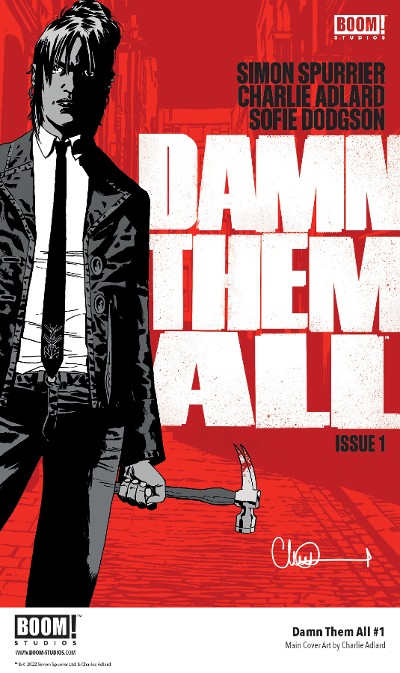 There’s a consistent platonic ideal of Constantine, cobbled together throughout all of these iterations — whether they’re actually depicted that way or not. In this superior Hellblazer riff, Si Spurrier, Charlie Adlard and Sofie Dodgson are determined to give us something like the real thing. Ellie “Bloody El” Hawthorne is the niece of famed occultist, a magic-wielding chancer who had no issue playing both sides of the law and the celestial divide. A sort of occult Yojimbo. El is more deeply entrenched on the “wrong” side of things, employed as an enforcer by a London mobster who has a soft spot for mysticism. Despite her own knowledge of the arcane, El relies more on the “hammer” aspect of her “magic hammer” weapon of choice to get things done. That’s until a rival gang crash a funeral, summon an otherworldly being to cause bloody chaos, and she finds herself dragged into a turf war poised to encompass realms material and otherwise. 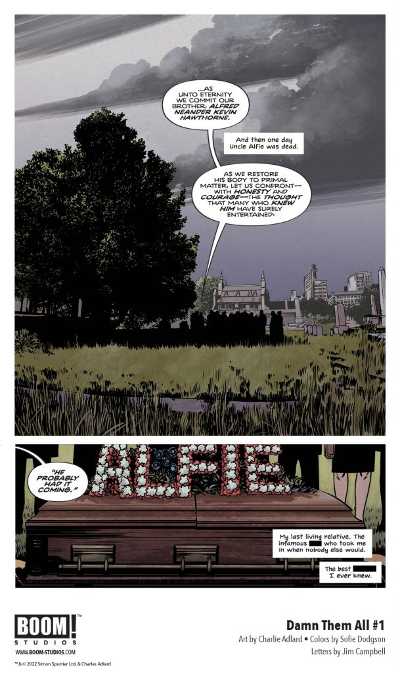 First issue El is as sweary, world-weary and trenchcoat-wearing as her comic book progenitor, but there are elements to her and the milieu she inhabits that are significant Spurrier wrinkles. She’s more self-serving, individualistic, than her ancestor, any fealty bound either by blood or payroll. The criminal underworld she operates within is a world away from The Krays — she wryly notes it’s more about using spreadsheets to do bad stuff nowadays, one of the many parallels drawn between the shady business of criminality and the rules-based magic system explicated through interstitial infographics in the Hickman mold — but is recognisable, authentic in its specificity. Rather than the episodic, globetrotting adventures of old JC, Damn Them All appears to be settling in for a thorough exploration of this world of wrong ‘uns. Thankfully they’re very entertaining wrong ‘uns. Spurrier proves he’s an ear for dialogue, bolstered by letterer Jim Campbell’s canny technique of rendering asides, whispers, and mumblings as smaller, slightly faded text. He’s also a dab hand at structuring a first issue, setting up enough of the world and its players whilst teasing at mysteries to come, ending on a devilishly bizarre cliffhanger. 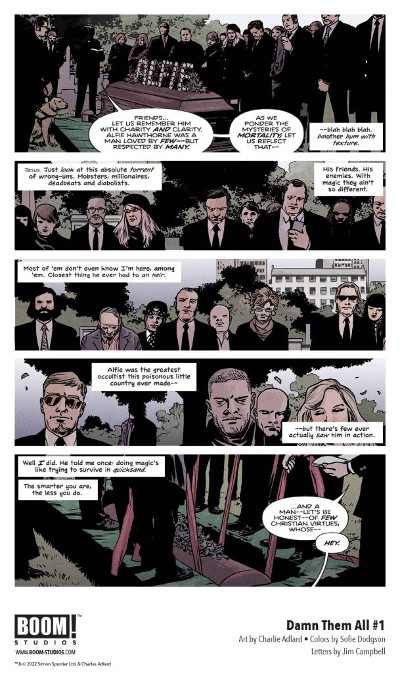 Weirdly, the big revelation offered by Damn Them All might be Adlard. The artist churned out 186 issues of The Walking Dead in fifteen years. It’s a truly staggering achievement unseen since, perhaps, the Silver Age (or since that libertarian misogynist finished his pig comic). Keeping that cultural juggernaut on the tracks was impressive enough; that he managed to produce some arresting black-and-white images during that period, under those time constraints, is a bonus. Now he’s had chance to catch his breath, he’s not just credibly consistent: he soars! In concert with Dodgson’s colouring, the art here approaches the noirish mood inspired by Alex Maleev’s run on Daredevil or even (yes) Sean and Jacob Phillips’s work with Ed Brubaker. The only pain point, so to speak, may be that the demonic presences aren’t all that disturbing or uncanny. The responses of those who witness them, driven instantly insane by the very sight, recall a laugh track on a bad sitcom, cueing you for a reaction you’ve not actually had. Blessedly, there does seem to be a point behind that decision, but it still feels like a missed opportunity for an artist who’s made a name illustrating all manner of human-and-inhuman monstrosities. 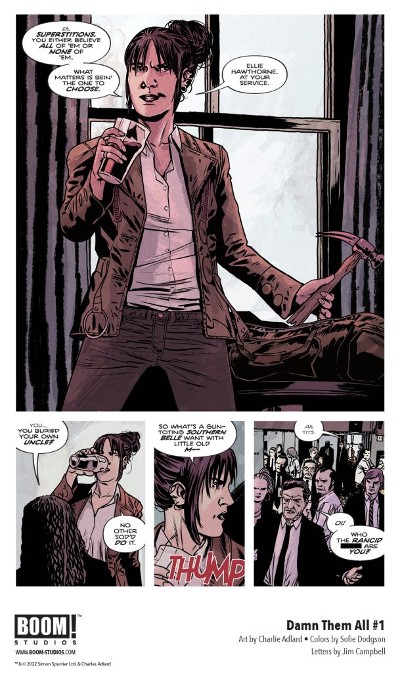 Enough plates have been sent spinning to bring me back for the next installment, and the world the creative team have established suggests more than a couple will be crashing down violently in the not-so-distant future. As with the best cover versions, Damn Them All doesn’t just give you a faithful chord-for-chord rendition of their influences. The lyrics are familiar, but the arrangement is entirely new, and by the end of this first issue, you’ll almost have forgotten where you know them from.