The Uncle Bob Adventures allow Darryl Cunningham to mischievously genre jump, opening up a world of story opportunities for his most affable central character.

Darryl Cunningham has become renowned over the last few years for his journalistic use of sequential art to inform and communicate. Books like Psychiatric Tales from Blank Slate – his thoughtful study of mental health issues – and Myriad’s Science Tales – a collection of comics essays debunking conspiracy theories and pseudo-science – have shown this remarkable ability to use the medium to elucidate and clarify relatively complex ideas. It’s for this reason that his upcoming graphic novel Supercrash, examining the global financial crisis of the last few years, is for many one of this year’s most eagerly anticipated British comics publishing events. 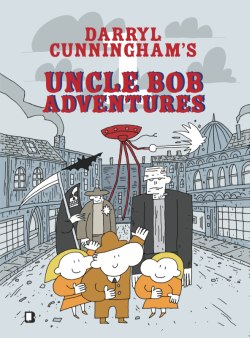 It hardly needs underlining then that his most recently published project, the first volume of his all-ages Uncle Bob Adventures, is a radically different type of storytelling (although its origins as a work-in-progress have had a long gestation). This is a Cunningham unfettered from facts and explanations, one who has let his unbridled imagination run wild to produce a quite gloriously silly piece of children’s fantasy. Comprising five stories of differing lengths, Uncle Bob Adventures offers us the opportunity to listen in as the titular hero of the piece recounts outlandish episodes from his colourful life to his two young nieces. Tales that often incorporate very familiar faces and situations from classic literature…

The first (and not especially insightful) comment to be made on the Uncle Bob Adventures is what sheer, joyful, rollicking good fun it all is. The stories jump around Uncle Bob’s eventful past in no particularly linear fashion, at first seeming to be exaggerated tall tales told to amuse younger relatives but, as the book progresses, appearing to have their own possible veracity within the confines of the fantastical world Uncle Bob inhabits. They range from a 1930s encounter in the Swiss Alps with the Frankenstein Monster to his childhood experiences with gunfighters in the Old West. The personal tragedy that followed his involvement in the Martian invasion of H.G. Wells’s War of the Worlds is poignantly juxtaposed with the events some years before in Victorian London when he confronted a vampire incursion.

Each story is uncomplicated in delivery but cleverly designed to appeal to the imaginations of its target audience, full of unlikely occurrences and impossible feats that will bring a smile to the faces of younger and older readers combined. Cunningham doesn’t patronise that juvenile readership he’s aiming at, though, letting them work to put together the jigsaw puzzle pieces of his protagonist’s life to date. 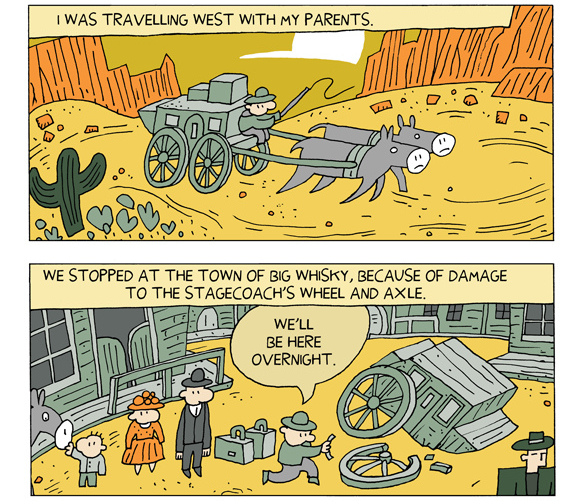 Those familiar with Cunningham’s previous work will recognise his appealingly angular and blocky cartooning. It lends itself well to an all-ages book with the sometimes skewed perspectives emphasising the childlike interpretation of the world that is so central to the narrative structure. There’s an intelligent use of subdued colouring here as well to further the atmosphere of each entry. A frosty blue tone gives a chilly vibe to the snowbound Frankenstein Monster story, for example, while dusty oranges bring the Wild West to life and Halloween hues give the vampire story an extra air of the creepy and the supernatural. 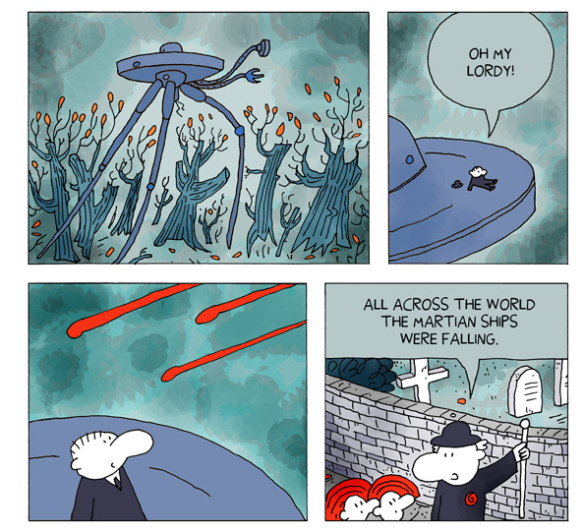 There are echoes here of ‘70s British kids show Mr. Benn in that the basic premise of Uncle Bob allows Cunningham to mischievously genre jump, opening up a world of story opportunities for this most affable central character. It’s as polarised an offering from the work he has become known for as you could imagine but it underlines his skill as the great communicator of the comics form. Whether it’s highlighting the absurdities of irrational thought in Science Tales or stimulating the minds of wide-eyed readers picking up comics for the first time in Uncle Bob Adventures, Cunningham knows how to work a page to maximum effect to engage and involve his readership. A welcome second volume of Uncle Bob is coming from Blank Slate Books later this year!