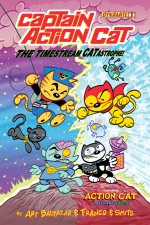 From the Eisner and Harvey award-winning, New York Times bestselling famous cartoonists Art Baltazar and Franco comes the crossover epic event of a lifetime! Finally, Captain Action Cat meets Action Cat and the characters from Aw Yeah Comics! Also crossing over with Dark Horse Comics characters such as Ghost, X, Captain Midnight, and The Occultist, this series promises the typical zaniness that the creators of Tiny Titans are known for. True story!

In Captain Action Cat: The Timestream CATastrophe #1, there is something evil out there and Evil Cat is determined to find it… even if it means searching throughout the Silver Age to do it! Could this blip on the screen be the one known as Doctor Evil Cat? What will happen when the Silver Age and the “Aw Yeah Age” collide! What does this mean to the timestream?  The fate of the comic world may change forever!  Plus, a mysterious frozen souvenir from the Golden Age makes a visit! For the first time ever, The Timestream CATastrophe introduces Captain Action Cat, an anthropomorphic action hero based on the classic action figure / adventure toy, Captain Action!

“All I have to say is: Wow!” says co-writer/artist Art Baltazar. “I am amazed at the comics which we get to create sometimes! Captain Action action figures have been a classic American toy forever, and now that he is back, the world will be a better place!  It’s an honor to be working so close to this iconic character… even if our version is a cat. Aw yeah!”

“I feel so lucky to be in this industry and that people are willing to let us play with their toys,” adds co-writer Franco!  “This one means quite a bit to me personally because this crossover event features something we created — Action Cat from our own Aw Yeah Comics — which we get to crossover with Captain Action (as a cat) and the heroic crew from Dark Horse.  ‘Wow’ is an understatement!  Every year, I think we cannot top what we did before… and I am proven wrong, as this is one of the coolest things I’ve ever had the privilege to work on!  Aw Yeah, Dynamite!”

“I’ve gotta say, we’ve had some fun, high octane, cataclysmic, unbelievable crossovers through the years,” states Dynamite CEO / Publisher Nick Barrucci.  “But this crossover will be the most fun! What Art and Franco have put together is just incredible! Bringing together the Aw Yeah universe, the Dark Horse universe, and the Dynamite universe — this true trifecta is going to be epic.  And did I mention fun?  Aw Yeah!”

“Art and Franco have been having a blast with this “Itty Bitty” series. We loved their treatment of Hellboy and I’m particularly eager to see what mayhem they’ll inflict on our superheroes.” states Dark Horse President and Publisher Mike Richardson. “Ghost and X teamed with Action Cat and Captain Action? Who would have thought?”

“Art and Franco bring a unique and infectious brand of fun to everything they do, and we’re thrilled to have them focus on more Captain Action adventure with Dynamite in 2014,” said Ed Catto, founding partner of Captain Action Enterprises.

Captain Action Cat: The Timestream CATastrophe #1 will be solicited in Diamond Comic Distributors’ February Previews catalog, the premiere source of merchandise for the comic book specialty market, and slated for release on April 16, 2014.  Comic book fans are encouraged to reserve copies of Captain Action Cat with their local comic book retailers.  Captain Action Cat will also be available for individual customer purchase through digital platforms courtesy of Comixology, iVerse, and Dark Horse Digital.