This summer, Dark Horse Comics released Emily McGovern’s Twelve Percent Dread, a graphic novel that combines explorations of complex social issues with the everyday lives of its ensemble cast. The book follows three lead characters; out-of-work Katie who fears life is leaving her behind; Katie’s ex-partner Nas who is worried their residency in the UK may be coming to an end; and go-getter Emma, in a top level position at tech giant Arko.

We caught up with McGovern to chat about the tools of the form, creative process, and the challenges of bringing complex, interweaving plotlines to a satisfying conclusion…

ANDY OLIVER: Twelve Percent Dread is very different in a number of ways to your previous offerings My Life as a Background Slytherin and Bloodlust & Bonnets. In that regard what were the particular challenges in co-ordinating such an intricate web of interweaving plot threads in this book?

EMILY MCGOVERN: All I can say is, it was really hard and caused me a lot of stress! I was inspired by the intricate plotting of shows like Arrested Development, and also of Alan Moore’s Watchmen and its Damon Lindelof show adaptation. As a reader/viewer I love the feeling of when many disparate threads finally all tie together, so I was hoping to achieve that in my book. AO: There’s a particular tempo and rhythm to your distinctive page designs and panel structures in Twelve Percent Dread that reflects both some of the tech themes and the emotional tone of the book. What kind of reaction were you looking to elicit from the reader through those storytelling choices?

MCGOVERN: The smartphone – in the book it’s called the Arko Phone – is the totemic symbol of the book, and so the panel structures reflect that particular design: panels shaped like notifications with bevelled edges, the fact that there are many small panels, reflecting the experience of notifications arriving in a constant stream, or of the endless scroll of Twitter. The book is about the anxiety of constant stimulation from our tech environment , so the design is reflective of that. 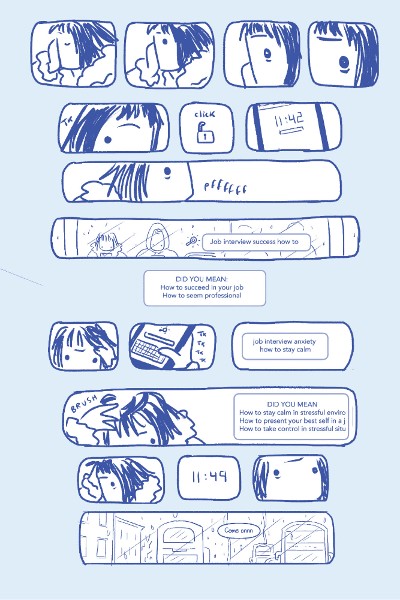 AO: Given the large cast involved and the very different life experiences of Katie, Nas, Michelle and company did you ever find the characters taking you in unexpected directions as they began to take on a life of their own?

MCGOVERN: Something that was a bit unexpected was that, after a while, characters who I’d initially drawn in very broad strokes, as a parody or stereotype, I couldn’t help but give greater depth to. A character like Jeremy, the bumbling 90s ex-comedian, was originally quite a flat character designed to present obstacles to his young lodgers. But then I couldn’t help but give him a sweeter side too. 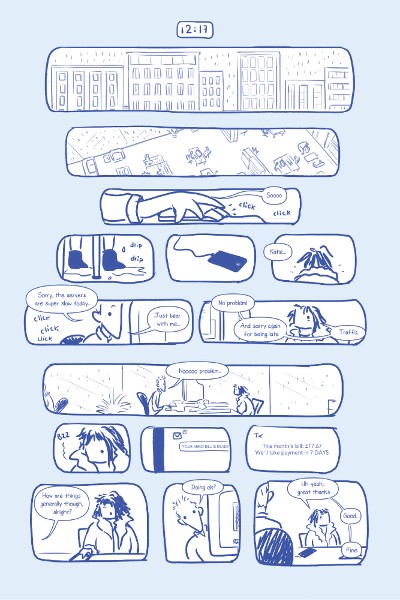 AO: The social commentary of Twelve Percent Dread is incredibly wide-ranging, from privilege, gender identity and the realities of the employment market through to our obsession with social media, the tyranny of capitalism and the growing dependence on tech. Were your objectives in covering so much ground to emphasise how inextricably interlinked so many of these social issues are?

MCGOVERN: Yes. Largely it was all the things I’d been thinking lots about, that preoccupied me – I’d been reading non-fiction books such as Surveillance Capitalism by Shoshana Zuboff, Hostile Environment by Maya Goodfellow, Capitalist Realism by Mark Fisher, and investigative articles on business and tech corruption in outlets like the Financial Times. The desire to track, categorise and place value on every aspect of our lives and culture was interesting to me, which is why numbers are a big theme in the artwork. The neoliberal ideology of market value and growth, the social media pursuit of engagement and likes, the obsession in Britain with the number of immigrants, the tracking of the self via apps and valuation of the self in terms of productivity. In contrast to that, I became very interested in the Buddhist concept of zero, as a kind of rejection of all that – there’s also lots of zeroes in the artwork, if you look out for them. For a while I looked like that meme of Charlie Kelly with the cork board and the red string, and my editor was getting a bit worried. So yes, to answer your question – it all seems connected to me! 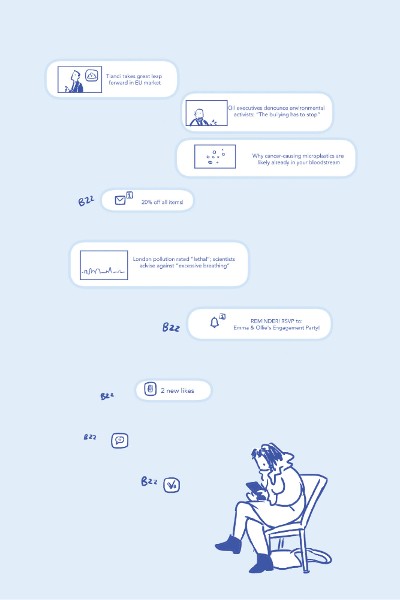 AO: Can you tell us about your process and what mediums you work in?

MCGOVERN: The very early phase involves me taking myself out of the house – to a park or cafe – with just a sketchbook or sheaf of paper, and writing down ideas. This was just before the pandemic hit – after that I was confined to the house, so I worked mainly on the sofa. I would write a script draft on my laptop, then adapt it into a storyboard on paper, chapter by chapter. Then later I moved to Clip Studio Paint, which is the software I drew the whole book on, using a Wacom tablet and pen.

AO: As a huge fan of work that really embraces the unique properties of the form and tells stories in ways that only comics can there were a number of sequences in Twelve Percent Dread that particularly stood out for me. What is it about the medium that most appeals to you in terms of how its specific narrative tools allow you to make such a profound connection with your readers?

MCGOVERN: It’s simply the only medium for me – everything else feels limiting, as comics are just unbelievably elastic. I particularly love an artist like Jillian Tamaki, who seems to enjoy pushing herself and experimenting with her art style with every new book. 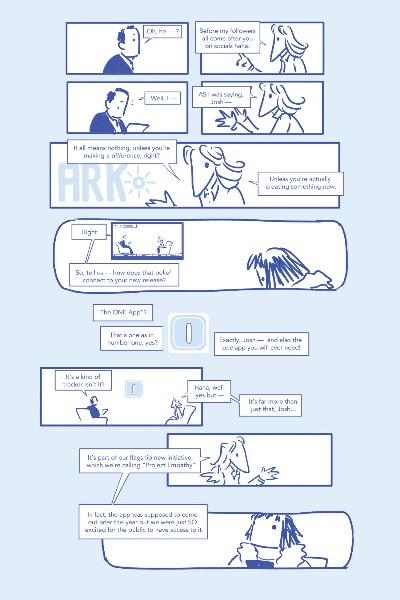 AO: There’s a lot of playful use and even subversion of business speak and buzz terms in the book. How much fun was it to so effectively skewer that kind of jargon in both overt and subtle ways?

MCGOVERN: I wish I’d actually spent more time in the corporate world, picking up this stuff, as it does really tickle me. It’s funny how quickly you acclimatise though. I remember the first time I heard the word “content” I was absolutely blown away, I thought it was the most self-parodic thing I’d ever heard. Now I use it! Unwillingly, but even so.

AO: After the 400-plus pages of Twelve Percent Dread it may be too early to be asking this question but what’s next for Emily McGovern? Do you have any new comics projects in the pipeline?

MCGOVERN: At the moment I’m really enjoying making short form comics for my Instagram and Patreon – I’ll stick with that for a while. I’d love to adapt Twelve Percent Dread into a TV show, as sitcoms were my first love and this book is kind of my own sitcom. So if any executives are reading…