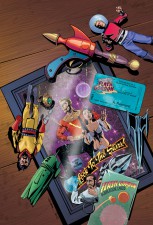 “Dynamite and editor Nate Cosby have put together the dream team for Flash Gordon, and I’m the lucky writer who gets to work with them,” says Jeff Parker.  “We’re bringing Flash back for a new audience.  It’s over-the-planet high action and adventure where Flash’s spirit and optimism are as powerful as anything the forces of Ming the Merciless can dish out.  We also have some of my favorite artists contributing covers – make no mistake, this book is going to absolutely kill!”

The new Flash Gordon series places the ultimate sci-fi hero on the bizarre planet Mongo, where his thirst for thrills and danger makes him the perfect weapon against world-breaking Ming the Merciless and his awful inter-planetary swarms of terror.  Can the cocksure Man From Earth funnel his overconfidence into saving worlds, or will the universe fall to Ming?

Dynamite has assembled a team of three highly respected creators for the new Flash Gordon series, individuals whose recent comics work has made their names instantly recognizable to fans.  Writer Jeff Parker’s recent successes at DC Comics – including Aquaman and the retro-chic Batman ’66, follow his many years as a contributor to Marvel titles including Agents of Atlas, X-Men: First Class, and Hulk.   Evan “Doc” Shaner will bring his kinetic visual style seen in Deadpool and Ghostbusters to the Flash Gordon project, just as Jordie Bellaire will bring the coloring flair she’s known for on such titles as Pretty Deadly, Captain Marvel, and The Rocketeer.

Flash Gordon #1 will feature a wide selection of cover variants, presented by some of comics’ most talented artists:  Gabriel Hardman, Jonathan Case, Declan Shalvey, and Marc Laming.  Stephen Mooney provides a special 80th Anniversary Cover, illustrated to capture an aesthetic of the bygone golden era, while Ken Haeser provides a cute Subscription-Only Variant Cover of “Li’l Flash”, intended as a reward for dedicated fans who preorder with their local comic shop retailers.  A Blank Authentix Cover will be created for the first issue, featuring blank white space on the cover perfect for convention artist commissions or the creative whims of the do-it-yourself fan.

Flash Gordon #1 will be solicited in Diamond Comic Distributors’ February Previews catalog, the premiere source of merchandise for the comic book specialty market, and slated for release on April 9, 2014.  Comic book fans are encouraged to reserve copies of Flash Gordon #1 with their local comic book retailers.  Flash Gordon will also be available for individual customer purchase through digital platforms courtesy of Comixology, iVerse, and Dark Horse Digital.