Cross#atch are a small collective of five manga creators from a variety of cultures who all share the experience of success in the UK Manga Jiman short story competition. Their anthology comic Hatchlings showcases some of those contest entries and collects four tales that serve as an introduction not just to their work but to the individual creators themselves.

My first taste of the output of any of the Cross#atch crew came last year when I was rather taken by Elena Vitagliano’s contribution to the all-woman anthology Team Girl Comic #5, ‘Underground Glimpse’ (here), which I described as “a quite beautiful story of passing strangers and lives fleetingly touching.” A few months later in ‘Small Pressganged’ I revisited Elena’s work when I reviewed The Deep Needs Train, the Manga Jiman winner for 2011 and the opening entry in this book.

The Deep Needs Train was a rather touching fantasy concerning a mysterious steam train, only seen by a select few, that takes its passengers on a journey to their heart’s desire rather than a geographical destination. You can read the full review of that story here but, for those with time-management issues wanting a quick appraisal, I summed it up as “a brief but rewarding foray into regrets, despair and yet, ultimately, second chances. An emotionally intense but satisfyingly feelgood production.” It underlined that earlier promise I had seen in Vitagliano’s Team Girl Comic work and her ability to imbue her work with a delicate and evocative sensitivity. 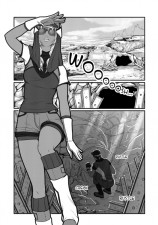 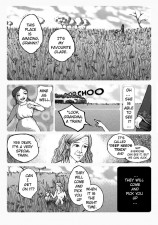 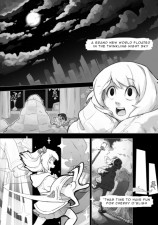 Sample pages from ‘I Love You’, ‘The Deep Needs Train’, and ‘To Sail a Moon’

Now, I have to admit I am unfamiliar with the other contributors in Hatchlings but there’s a sweet touch here in that following each creator’s story there’s a brief bio and an introductory one-page strip to highlights their individual styles. It fosters a sense of community to the project and, indeed, there’s clearly been a lot of concentrated thought put into the presentation of Hatchlings to make it as accessible as possible. Each story begins with its own colour “cover” while the prefaces from creators and Manga Jiman judges Ilya and Kiriko Kubo give a neat overview of the material’s provenance.

Of that other work presented here, Gi Martins and Sara Ferreira’s ‘I Love You’ is a sci-fi romance set in a post-apocalyptic future. This one is an object lesson in how to construct a meaningful and complete narrative in just a handful of pages – an art in itself and one that is often underappreciated – replete with strong characterisation that gives the illusion you have been reading about its two protagonists for years rather than just half a dozen pages. A well judged piece of visual playfulness sees the flashback sequences to the couple’s much younger days illustrated with a more childlike perspective, further cultivating a sense of familiarity between audience and cast. 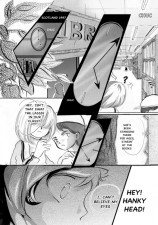 The standout offering in Hatchlings for me, though, was Asia Alfasi’s ‘Beginnings’ (sample page right), a tender slice of autobio comics that tells how the author overcame her schoolground status as Libyan immigrant outsider when she moved to Scotland as a child. Through her classmates’ shared interest in her beloved manga, barriers are broken down and friendships form. Beautiful, enchanting comics from a creator I must investigate further. The final 8-pager is Katja Hammond’s ‘To Sail a Moon’, a dreamy fantasy of a young girl’s nocturnal voyage through the stars on a lunar vessel and what she encounters on that journey. There’s something very Sendak about both the tone and the illustrated elements of the dream world presented here and, for all its whimsy, this is also a quite haunting piece of storytelling.

In a Hatchlings back cover soundbite, Ilya talks about the entries to the Manga Jiman competition over the years as being “filled with heart and soul.” As lazy as it sounds in a review to simply quote from cover copy I really cannot think of a better way to actually sum up the anthology as a whole. That’s because those five words absolutely nail it. With its varied subject matter and diverse sense of narrative invention, Hatchlings is the ideal book to put under the haughty noses of those who still labour under the mistaken impression that manga is a “genre” to be easily dismissed rather than simply another term for the storytelling medium that is comics, full of all the sundry possibilities that entails.