The basic idea behind Haunters Gonna Haunt is actually a rather neat one, taking the stock sitcom standard of unlikely housemates one step further with a suitably supernatural twist. Jumping from one medium to another for a moment there are echoes of a number of cult television shows of a comedic bent here: The Ghosts of Motley Hall, Rentaghost and So Haunt Me to name just a few that exploited the notion of mischievous ghosts playing havoc with the lives of their mortal hosts. 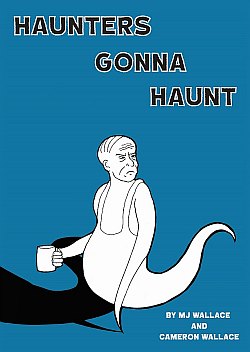 MJ Wallace (co-writer/artist) – someone whose work I’ve enjoyed in the pages of Team Girl Comic – and brother Cameron (co-writer) introduce us to curmudgeonly ghost Cecil who, occasionally aided by his more laidback spectral junior Bernard, makes life difficult for a suburban couple with a series of stock-in-trade phantom manifestations, poltergeist activity and unearthly noises. MJ Wallace does a fine job in giving Cecil a succession of ever more grotesque grimaces as his crabbiness continues to get the better of him; gurning bad temper oozing from the page.

Most of the comedy comes from Cecil’s grumpy approach to his haunting duties with Bernard’s general ineptitude at the spirit lark coming a close second. The first two of the three stories are played almost entirely for laughs. Admittedly neither tale is particularly involved in structure but the basic premise is a fun one, though I’m not sure its potential is ever exploited to quite the level it could be. There’s also a note of repetition throughout with each tale revolving to varying degrees around one core central conceit which sees a succession of priests, mediums and ghost hunters brought in to investigate the preternatural disturbances in each story.

However, those observations aside, a strong central idea and an amusingly cantankerous antagonist ensure that Haunters Gonna Haunt is a likeable and distracting exercise in slapstick from beyond the grave. What’s most interesting is the marked shift in emphasis between the first two stories, which focus on ghostly giggles, and the third one which moves into an altogether different dramatic arena.  Set some years later, after the arrival of a child into the family home, it’s both poignant and actually rather touching, centring on an unlikely bond between apparition and young girl. It’s the furthest away from the book’s initial premise but the strongest of the three offerings on show. 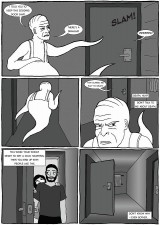 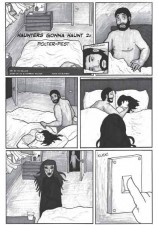 If some of the material discussed here sounds familiar then that’s because it’s already been printed in Avery Hill’s Reads anthology. But even if you’ve already read the first two stories there it’s well worth picking up Haunters Gonna Haunt for that quite lovely finale. I defy you not to feel a little choked by the comic’s affecting last page!