Avery Hill Publishing’s Reads is an anthology that is steadfastly unashamed of its old school, grassroots small press approach. As diverse a collection – in terms of both genres and styles – as you could ever hope to experience in a SP book, it combines both chapters of ongoing tales with one-shot stories, mixing and matching creators of differing levels of experience. 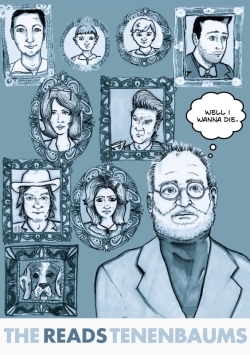 I reviewed the first two issues of Reads last year in ‘Small Pressganged’ here and, despite some reservations about the wait between issues for what amounted to bite-sized chunks of the serialised material, I thought Reads had a distinct and rather quirky charm. This third entry in the series sports a fun Royal Tenenbaums spoof cover from Team Girl Comic’s Coleen Campbell and is the first issue to be perfect bound.

Where, then, to begin in this eccentric mish-mash of wildly differing subject matter? Well, given my recent interview with Owen D. Pomery here, then the preview of his upcoming The Megatherium Club included in #3 would seem a most appropriate starting point. This surreal comedy piece has something of a pseudo-historical air to it given that it’s based on a very real gang of 19th century gentlemen scientists who operated out of the Smithsonian Institute.

Pomery, however, has taken these characters and distorted them to great comic effect, giving the strip an affected period feel that makes the drunken antics of these sentinels of a new age of discovery all the more droll in its delivery. On the down side this promo is slightly marred by some of the text in its double-page spreads disappearing into the gutters of the page but, hopefully, that will be remedied when The Megatherium Club is printed in its entirety in the months to come. Still, it’s an anticipation-building taster for what’s to come. 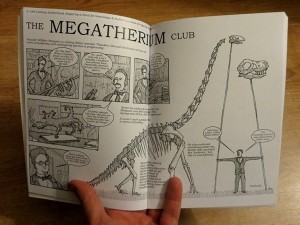 Tim Bird, the gent behind the very well-received Grey Area (also published by Avery Hill), contributes the slice-of-life ‘Darkness on the Edge of Town’, a complete tale that focuses on nostalgic memories of our childhood hometowns, growing up, and moving on. It’s a wistful, pensive piece of storytelling that will undoubtedly strike a chord and underlines just how skilful Bird is at this type of semi-autobio work. Atmospheric and rather touching.

Rapidly switching genres again, Ricky Miller and Steven Horry provide the third chapter of their offbeat and slightly camp Hilary Harper series ’Revenge of the Dinosaurs’ with their Adam Adamant-style adventurer continuing his perilous encounter with the Crystal Palace dino statues come to life. A jolly romp that is thankfully in no danger of ever taking itself too seriously! 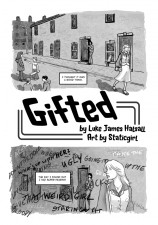 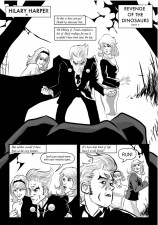 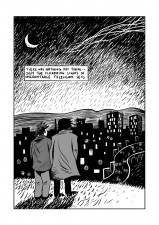 ‘Gifted’, ‘Hilary Harper’ and ‘Darkness on the Edge of Town’ from Reads #3

Elsewhere, M.J. and Cameron Wallace bring us the supernatural sitcom shenanigans of ‘Haunters Gonna Haunt!’ which despite being a little slight in plot certainly has a premise with the potential to run for some time. And while Luke James Halsall and Staticgirl’s ‘Gifted’ was, at heart, a fairly standard tale of super-powers gone awry I was nonetheless rather impressed by a couple of quite neat visual storytelling tricks in this four-pager. The latest episodes of the long-running ‘Metroland’ and ‘Bad Times Ahead’ round out this third issue.

There really is something very endearing about Reads. Perhaps it’s those unpretentious presentation values and that open, self-deprecating editorial voice. Or maybe it’s the aforementioned rather random blend of quite disparate fictional categories that lives between its covers. Whatever the case, I’m hugely thankful for the likes of books like this. We’ve long since passed the point where a number of the many excellent British comics anthologies that we still class as “small press” effectively became prozines. Thankfully we still have Reads, Team Girl Comic and others to fill the void they once inhabited and provide a platform for creators whose work may not be quite as honed but is certainly no less rewarding.