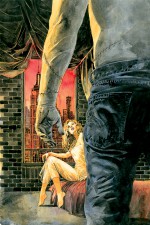 Long out of print, Sean Phillips’ Heart of the Beast returns as a digitally remastered edition in May features additional scrapbook material and commentary by the creators.  Celebrate the 20th anniversary of this hauntingly evocative graphic novel written by Dean Motter and Judith Dupré, and featuring lavishly painted artwork by superstar Sean Philliips (Fatale, Criminal)!

The Heart of the Beast explores the timeless themes of classic horror literature, set against the backdrop of New York City’s decadent art world of the nineties.  Sean Phillips personally spent months scanning all the oginal art, so it can be provided to the public in a beautiful brand-new hardcover! Sandra, a beautiful and young bartender, meets the enigmatic Victor, a man with strange scars and stranger secrets.  A tale of gothic love and modern horror, this graphic novel drew praise from critics and fans alike, and is long overdue for a 2014 release in an all-new prestige format edition. Make sure to own Heart of the Beast when it is released this coming May!

“I’m not sure why Dean and Judith trusted me with painting almost a hundred pages of their story,” says the artist phenom Sean Phillips. “I’d been drawing comics professionally for over ten years back then, but almost all for UK publishers and mostly sci-fi. New York was as much sci-fi as Mega City One to me then though, as I’d never been there. Still, I’m glad they did and I got to illustrate their great story and learn to paint in the process. It all turned out alright even if nobody bought the book. After spending months scanning all the original art, it’s great to see it remastered and available again in a handsome new hardcover.” 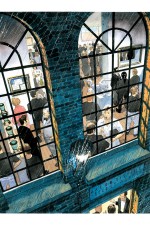 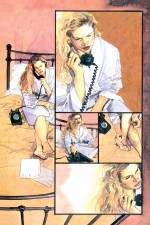 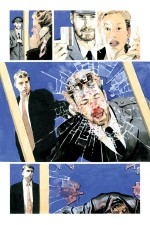 “Writing The Heart of the Beast was a way to honor the wild, exciting, and uncertain decade of Soho’s heyday,” states co-writer Judith Dupré. “It was great fun inventing a new Rembrandt-apparently, I didn’t sleep through all my art history classes. I get sentimental remembering things that are no longer new, like ATM cards, or no longer used, like answering machines.  Art, though, is a constant.  Sean did an amazing job capturing the sultry grit of lower Manhattan.”

“I’ve been privileged to work with a number of first-rate artists and writers over the years,” adds co-writer Dean Motter. “One of my favorite collaborations was the Heart of the Beast. Working with illustrator Sean Philips and co-writer, Judith Dupré I once more explored an oppidan nightmare. But this time it wasn’t Mister X’s Somnopolis, Terminal City, Electropolis or even The Prisoner’s Village. It was an actual place; lower Manhattan’s bohemian artist district, where I made my home for a number of years. Sean’s brilliant depiction remains both sublime and evocative of that time, and brings our story to life in all its disquieting glory. I’m thrilled to see The Heart of the Beast restored and reprinted in this edition and look forward to it reaching a whole new audience.”

“Heart of the Beast is an incredible graphic novel with a wonderful story and majestic artwork.” States Dynamite CEO and Publisher Nick Barrucci.  “As we’ve come to work with Sean on a few projects, he recommended that Dean and Judith consider us as a potential publisher.  I’m honored that Dynamite has been given the opportunity to publish this book in a beautiful form never before seen! It’s a personal project for all involved, and the work that Sean is putting in to remaster each and every page in the series is incredible.”