If you are a human being of the more emotional disposition – or indeed a human being of any emotional capacity whatsoever – I would caution you to take care when reading the short yet gorgeously presented work that is Jaako & Lauri Ahonen’s Jaybird. It may leave you shaken – and even psychologically bereft — for a period of time afterwards.

Jaybird is the story of the titular avian character – a small sheltered jaybird who lives in a massive darkened dusty house, alone but for the company of his ailing bedridden mother and a silent arachnid companion (definitely up for cutest critter award).

The windows have long since been boarded over and the slightest hint of curiosity about the outside world is met with a horror story from Jaybird’s controlling mother about vicious and murderous ‘bad birds’.

Terrified by these stories, Jaybird quenches his thirst for discovery and makes it his mission to make the house as quiet and hidden as he possibly can – that is when he’s not busy preparing his mother’s food or dusting massive imposing portraits of his forefathers.

This is a story almost completely without dialogue, and it’s a credit to the expressive skill of Lauri Ahonen’s artwork that the story moves so clearly and deeply without the need for exposition.

Even the comic’s few lines of speech are not particularly vital to the storytelling – this is a truly visual piece. And the visuals are incredible. The pages manage to be dark without being heavy or gloomy, oppressive without being limited and sombre without losing the sense of childhood and innocence – and even hope – that Jaybird’s character has. Thick brushstrokes and large panels cover pages with a stunning richness and depth of work that’s both clear and subtle in its delivery.

There is more going on in this story than the life of one little bird. Half-explained hints and macabre discoveries point to altogether darker driving forces behind the original isolation of Jaybird and his mother, partially explaining her strict and seemingly cruel behaviour; she’s struggling with her own demons. 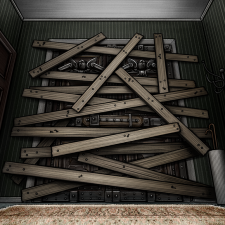 Themes and symbols of war, loss and conflict permeate the edges of the world of a bird who’s too afraid to come out of hiding when the outdoor world comes knocking on his door – hiding from a fear that will then be passed down from parent to child, to leave another jaybird afraid to take a chance on the outdoor world.

I won’t spoil the impact of the final pages of this story by giving away its ending, but I must repeat my warning that those pages will stay with you.

They may leave you like they left me – desperately searching for a missing page or a final chapter I’d somehow miraculously missed… or wondering how I could ever be so affected by a bloody spider of all things.

But please do read this little gem, it’s a work of art in its own right and a subtle and skilfully crafted piece of work – but don’t expect to be able to forget it any time soon.