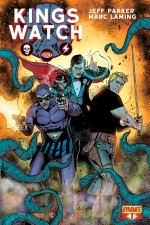 Flash Gordon, The Phantom, and Mandrake the Magician team-up in the upcoming Dynamite series, Kings Watch! Written by superstar writer, Jeff Parker, and drawn by artist Marc Laming, and a cover by Laming as well as a Subscription-Only cover by Eisner Award winning artist, Ramón Pérez (A Tale of Sand). Kings Watch is available in comic book stores and digitally this coming September!

In KINGS WATCH #1, panic spreads across the world. Strange phenomena fills the skies. Millions have nightmares of wild lands filled with horrible creatures… then wake to find the monsters are real. What are three men willing to sacrifice to save us all? Superstar writer Jeff Parker (Dark Avengers, Red She-Hulk) and artist Marc Laming (Planet of the Apes) deliver the earth-crushing event of 2013, featuring Flash Gordon, The Phantom, and Mandrake the Magician like you’ve never seen them!

“As a kid I saved a healthy stack of comics pages from the newspaper to follow The Phantom’s jungle adventures, and copied drawings of the great Sy Barry from those,” states Kings Watch writer Jeff Parker. “The other iconic creation of Lee Falk, Mandrake was intriguing too, but I mostly had an idea of him from some brief radio theatre episodes on an album. Later I was lucky to find some of the Nostalgia Press reprints of his stories. I was also (and still am) really into Flash Gordon. I loved the Filmation cartoon so don’t be surprised if you see elements of that here. It was also one of the first movie serials I saw thanks to our PBS station showing them- how perfect was Buster Crabbe as Flash? I of course went to the De Laurentiis movie multiple times, and got any comic book with him. Then when Kitchen Sink Press put out Alex Raymond’s original newspaper strips, I finally got the whole lush epic. Mandrake, Phantom and Flash are really where it all begins for super action heroes, they influenced so much of what we read and watch today. Marc and I are having the best time reintroducing the pulp adventure trinity for today’s readers, and bringing them together in one thriller which hasn’t happened in years. I can’t wait for new readers and longtime fans to read this.”

“I remember the summer of 1976 for three reasons; the long summer that year when it was so hot that the pavement melted, the USA’s Bicentennial celebrations that even reached our shores in the UK and the first time I saw the Flash Gordon movie serials on morning TV during the school vacation,” adds artist Marc Laming. “We were pretty adventure & Sci-Fi starved in the UK in the mid-70’s and those serials were like being hit by lightning and my 8 year old mind was blown. Around a year later a cartoon on TV (I have no idea of the title) that featured the King Features characters introduced me to The Phantom who was super cool like Batman and Mandrake who was a better dressed Dr. Strange and not nearly as scary! When the show finished I ran straight out to the newsagents to find out more.”

“I’ve wanted to work with Jeff (Parker) for years, and Kings Watch is a fantastic first project together. We’ve wanted to place together a cross-over with King Features most iconic characters for years, but needed to ensure we brought the fans the right writer. Jeff is that writer. And Marc Laming compliments Jeff’s script incredibly, as you will be able to see in the pages attached. This is a series that waited for the right team to bring this story together, and definitely worth the wait,” states Dynamite Publisher Nick Barrucci. 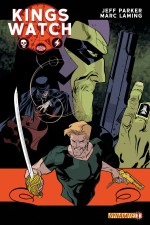 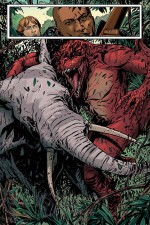 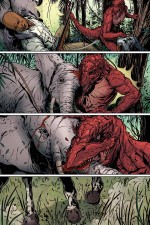 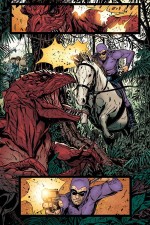 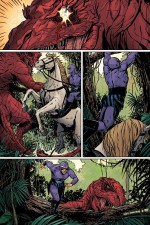