Dynamite Entertainment has provided BF with a preview to Kings Watch #1 in stores September 11, 2013. 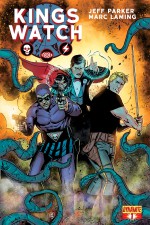 Panic spreads across the world. Strange phenomena fills the skies. Millions have nightmares of wild lands filled with horrible creatures… then wake to find the monsters are real. What are three men willing to sacrifice to save us all? 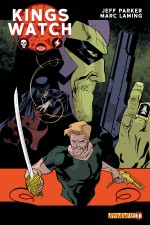