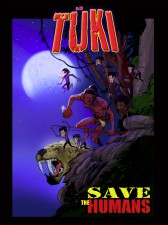 Jeff Smith explores the ice age in this all new mythological fiction of the first human to leave Africa. With the completion of his science fiction noir thriller RASL, Jeff Smith returns to his cartoony roots with TUKI, which will be accessible by all ages.

VISIT boneville.com and click on ‘Tuki’ TO READ IT NOW!
TUKI will be released in ‘Seasons’.  Starting today a page from Season One will be uploaded Monday, Wednesday and Friday at noon for the next 8 weeks.   Season Two will begin  April 14, 2014.
About TUKI: Almost 2,000,000 years ago, a great ice age gripped the earth, trapping all moisture in the polar icecaps, causing drought and upheaval in the rest of the world. Vast tropical jungles gave way to dusty grasslands, and all living creatures struggled to survive, including the many species of hominids. To avoid extinction, something had to be done.

This is the story of the first human to leave Africa.