As you enter  ‘Paul Klee: Making Visible’, a major retrospective currently on show at London’s Tate Modern gallery, you’re greeted by a banner quote from the artist, from which the exhibition takes its title:

Art does not reproduce the visible; rather, it makes visible.

For many of us, that’s also the beauty of the comics form: its almost limitless potential for expression. It allows an artist to create a narrative or a vision of an experience that transcends the constraints of either written language or strictly naturalistic visual depictions.

It’s therefore not surprising that a number of creators have used it to address the disturbed and disturbing experience of mental illness. Recent works in this idiom have included Swallow Me Whole by Nate Powell (Top Shelf), Depresso by Brick (Knockabout), Psychiatric Tales by Darryl Cunningham (Blank Slate) and, most recently, Lighter Than My Shadow by Katie Green (Jonathan Cape).

Another creator who has faced this challenge head-on is Elaine M Will, a Canadian writer/artist who suffered a mental breakdown earlier in her life and has for several years been converting her experiences into fictional form, through her long-form comic Look Straight Ahead.

Originally published online and then in a series of issues, Look Straight Ahead was nominated for a Joe Schuster Award in Canada in 2011 and was awarded a Xeric Grant the following year, enabling the recent publication of the complete work in graphic novel form.

The book tells the story of Jeremy Knowles, a seemingly regular 17-year-old high school student and aspiring artist. However, bullying at school and a growing sense of alienation at home push Jeremy gradually towards a complex mental breakdown.

As his mind runs away with him, he variously suffers from paranoid delusions (digging up his parents’ garden, convinced that the school bullies have planted a bomb there), a sense of religious grandiosity (in which he’s given a testimony to record in ‘God’s Secret Language’, which subsequently turns out it be meaningless squiggles) and a more familiar, debilitating depression (embodied as a black demon who urges Jeremy towards self-destruction).

The book tracks Jeremy’s one-step-forward, two-steps-back progress through the mental health system, as well as the difficulties his parents and friends face in dealing with his behavioural changes.

As alluded to above, what makes this book remarkable is Elaine Will’s aptitude for depicting visually the experience of mental illness. In a series of wonderfully unhurried sequences she uses every cartooning tool at her disposal to unpack the immersive sensations that Jeremy is subjected to. 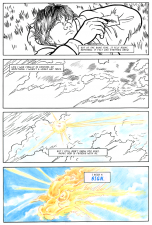 This visual invention makes accessible what could easily have become a very gruelling read. We’re given a real sense of what Jeremy goes through, and it must have been a strange process for Will to draw upon her own life and transmute her memories from spontaneous, subjective experiences into laboriously rendered pages.

She sets the tone for this kind of ‘altered realism’ very early on in the book, with a depiction of the still lucid Jeremy sensing himself ‘melting’ in the presence of Erin, his friend’s girlfriend, on whom he has a crush. Shortly after that we have a dream sequence that introduces a lot of the key themes and motifs (eg jigsaw pieces) that bind the book together.

Throughout the book’s 233 pages, Will uses – figuratively – every pencil in the box as she depicts Jeremy’s ever-changing state of mind. The book reveals inventive page layouts, a plastic sense of reality and sudden, dramatic, almost psychedelic flashes of colour, bursting off the predominantly black and white pages and hinting at the other dimension into which Jeremy’s illness propels his senses.

When his religious mania takes hold, it visits him in the form of a fiery orange dragon that draws him up into the sky and fills him with what he believes to be universal knowledge. Later, the effects of Jeremy’s anti-psychotic meds are shown with blurred and dulled backgrounds, and when he recalls his mania from a state of greater lucidity, his memories are “Sellotaped” together to form the pages. 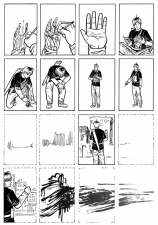 However, for all its narrative virtuosity, Look Straight Ahead left me feeling a little short-changed in its handling of the actual process of Jeremy’s recovery. His determination to overcome his very present demons is made clear, and his plan to ‘draw himself back to life’ is a cheering hymn to the healing power of art and creativity. But after Will’s obvious insight into the symptoms of Jeremy’s illness, I was looking forward to seeing more of her character’s process of self-realisation and reintegration (shot through the prism of the author’s skilled storytelling).

Despite that slight grouch, there’s no doubt that this is a major piece of work that could play an important role in helping mental health patients (and those around them) to articulate and understand what’s happening to them.

On a more mundane level, it’s another fine testimony to the unique narrative capabilities of comics. I’m looking forward to seeing what Elaine M Will does next.