Emerging graphic novelist Robert Hunter and the design-led British publisher Nobrow got to know each other in 2011 with The New Ghost, a moving and beautifully executed debut in the company’s ’17×23′ series of pamphlet comics, designed specifically to give developing artists the opportunity to flex their creative muscles.

Now Hunter has graduated to a full hardback volume, and the result, Map of Days, in many ways epitomises what Nobrow are bringing to the flourishing UK comics scene. The scale of the story also highlights its author’s ambitious approach; in its Prologue, it kicks off with a whole fresh creation myth that lays the ground for the fabulous (in every sense) tale to come.

Following the cosmic prelude, we meet Richard, the narrator, who stands by the edge of the sea and reflects on his betrayal of a friend earlier in his life. The story then jumps back to Richard’s childhood – and, in particular, a fateful summer spent at the house of his grandfather, Frank.

Richard is equally fascinated and baffled by Frank’s obsession with his collection of grandfather clocks, and it doesn’t take long for the story to slip effortlessly into an imaginative but satisfying fantasy, as the deeper, weirder purpose behind Frank’s preoccupation is revealed. 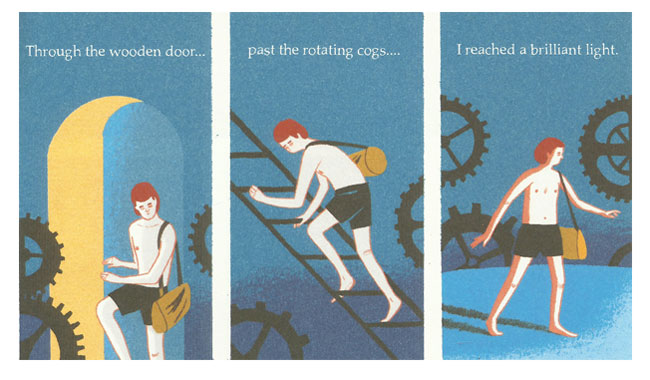 However, a bald synopsis of the plot does little to suggest the real beauty of this book, which, like so much of its publisher’s output, draws more from the world of graphic art than a legacy of just comics. In a similar way to the work of Hunter’s Nobrow cohort, Jon McNaught, each page is a delightfully balanced blend of illustration and narrative progression, delivered with a print-maker’s eye for colour and composition that goes beyond the “cinematic” storytelling to which most comics default.

He makes striking use of the colour palette offered to him by Nobrow’s meticulous printing methods, going from rich oranges and reds (reflecting the power of the sun) to cool nocturnal blues and an altogether more kaleidoscopic approach for the flowers and plants that play a key part in the story.

But this isn’t just a portfolio of Hunter’s illustrative chops: while the story quickly plunges deep into myth and fantasy, it retains its measured approach and plays out its themes of curiosity, obsession, disillusionment and regret with a light touch. As in The New Ghost, Hunter shows great skill at managing tone: this is a book where the simple pleasures of pottering around in the garden sit comfortably alongside a Great Flood that engulfs the world.

Rob Hunter personifies perfectly the range of influences and approaches currently feeding into the rejuvenated UK comics scene, and it’s hard to imagine Map of Days being published by anyone other than Nobrow.

Even its unusual elongated format – presumably designed to reflect the casements of the grandfather clocks at the heart of the story – highlights the care and thought put into the look and feel of the book. And, like all of Nobrow’s publications, it rewards sticking your nose in and having a good sniff!

At a recent talk at the Nobrow shop, as part of London Design Festival 2013, Hunter described how closely he works with his publishers in the development and production of his work. It’s exciting to see a company take such time and care over the evolution of a great talent. 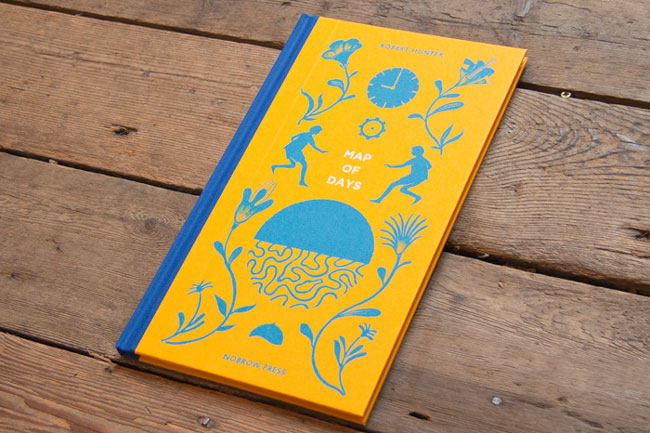