Nostalgia is a tricky thing, painting the past to be a lot rosier than it often is. That overriding scepticism comes to the fore whenever the great Lynda Barry approves the release of another collection based on her syndicated and undisputed classic, Ernie Pook’s Comeek. Familiarity with the characters who populate these early stories help to a certain extent, but eventually don’t matter because of how easily and immediately one is drawn into their individual private worlds. My Perfect Life begins where Come Over Come Over ended in a new edition published earlier this year. The spotlight, again, is on the delightful Maybonne Mullen and how she navigates life as a teenager in a version of America that no longer exists.

It’s hard to pinpoint what makes these strips so compelling, but there are a few obvious reasons that jump right off the bat, starting with Barry’s understated humour. This collection begins with Maybonne’s descriptions of her teachers, from Mr. Sargus who spits when he talks, to Mrs Briscoe who freaks students out with questions like “The answer my friend, is blowing in the wind. Who can tell me why? Hands?”, to Mr. Nelson who “hardly talks, hardly moves, hardly breathes” and is also nicknamed Mr. Nelson. Underlying these amusing observations are barely concealed layers of anxiety, as Maybonne struggles not just with navigating the intricacies of high school but coming to terms with early love, personified by Doug, the fickle teenager she can’t get out of her mind. 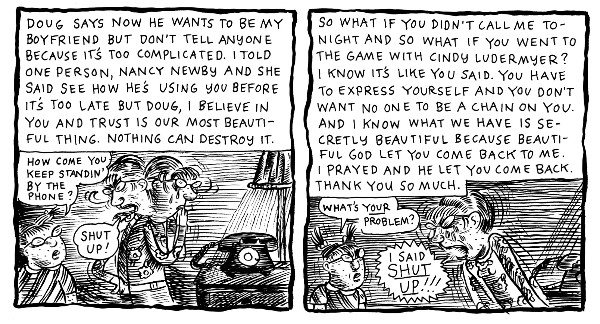 Barry has just two panels to work with on every page, which defines how she balances dialogue with art, using economy to her advantage. When that balance shifts, it leaves poignancy in its wake, in panels such as the one where an 18-year old stranger feels Maybonne up during a bus ride. It also emerges in longer stories such as ‘The Most Obvious Question’ that allow Barry more freedom to explore deeper emotions associated with family life that shape her young characters. There is genuine sadness in this story, as a counterbalance to the optimism that this young woman usually gravitates towards.

Much of Maybonne’s interior life is revealed in the form of letters to a friend, or what seem like diary entries, and what she says is almost always an accurate description of just how difficult it is to be a teenager irrespective of which generation one is born into. That universality makes it easy for one to slip into My Perfect Life without any prior knowledge of the other characters who have cameos in Ernie Pook’s world. 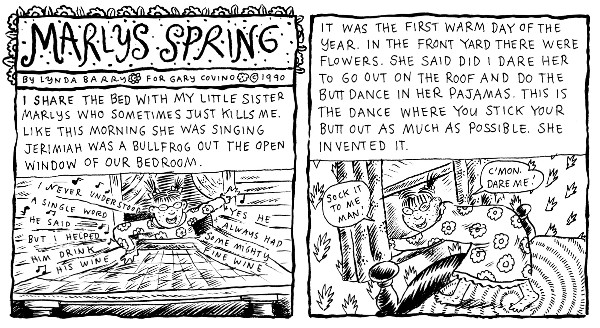 Readers who gravitate towards Barry’s work are presumably compelled by curiosity, and a need to see if the comics they loved as younger people hold up to scrutiny as adults. That they almost always do—despite the inevitable dating of slang like ‘crud’ and ‘barf’ sprinkled across these pages—makes these new editions such delightful collector’s editions. And while some may wish for more of Marlys, the love life of her older sister clearly deserves a lot of attention. It’s funny, cringe-inducing, troubled, and full of unexpectedly sweet moments, just as it should be.

It’s hard to predict what Barry may choose to republish next, and maybe a massive, collected edition featuring The Greatest of Marlys and everything that came after isn’t entirely outside the realm of possibility. One can, like Maybonne Mullen, always hope.