In May 2021, when cartoonist Keiler Roberts published My Begging Chart, she was asked how she viewed her work and if there was any distance between her and the person depicted on paper. Her response was telling, in that she described her comics as “straight autobiography,” but pointed out that the huge difference between them and real life depended upon what she edited. What was left out mattered as much, or more, than what she chose to keep in. 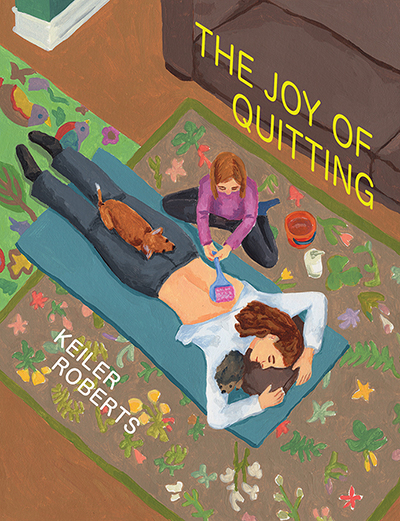 It’s easy to fall into the trap of conflating an artist with a work, because it allows us, as readers, to base our critique of that work on preconceived notions about the artist. It’s easier to make that error with someone like Roberts who has wilfully and consistently chosen to draw inspiration from her life. It is also what makes her approach special though, in the way she draws attention to moments of grace and beauty lying hidden in the mundane activities we are all forced to plough through.

The Joy of Quitting covers a period of eight years in Roberts’ life and involves people she lives with or interacts with daily. Her daughter plays a prominent role, along with her partner, parents, assorted family members, friends, and pets. These interactions lend themselves to humour, not only when her daughter Xia says something precocious (like asking for Tylenol because she’s sad or whispering to avoid fat-shaming squirrels) but when her partner asks the kind of questions that rile every woman up (“If I ask you something, do you promise not to get mad?”). 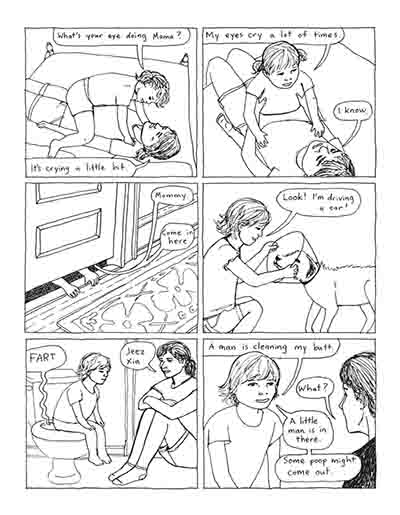 There is no discernible narrative arc, partly because of how life tends to unfurl in most households anyway, and partly because this is a collection curated from earlier ones: Powdered Milk (2012), Miseryland (2015), Sunburning (2017), Chlorine Gardens (2018), and Rat Time (2019). And so, what we get are snatches of conversation, mind-numbing chores that can’t be avoided, and a bit of happiness bubbling to the surface now and again.

Roberts possesses this unique ability of holding a mirror to our lives, compelling us to pay a little more attention to what we’re missing out. Her panels are full of little ‘aha!’ moments that stand-up comics deploy so effectively, making us nod in recognition while we giggle despite ourselves. She grapples with deeper questions too, such as mental illness, or the pros and cons of using her daughter’s life and conversation as fodder for her jokes. 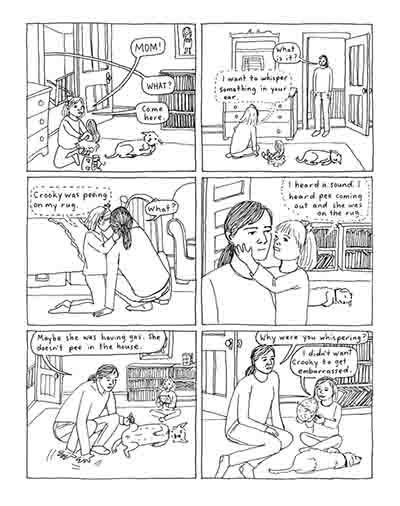 The idea of a moral fable drawn from everyday life is extended with another new book, Creepy, a collaboration with her friend Lee Sensenbrenner that has been published alongside The Joy of Quitting. Described as a ‘picture book for grown-ups’, this second book focuses on the overwhelming presence of digital devices in the lives of today’s children. It is a charming tale that allows Roberts to flex her artistic muscle, but the story itself doesn’t dive much deeper into why these online lives have begun to supersede the real world for so many young people. 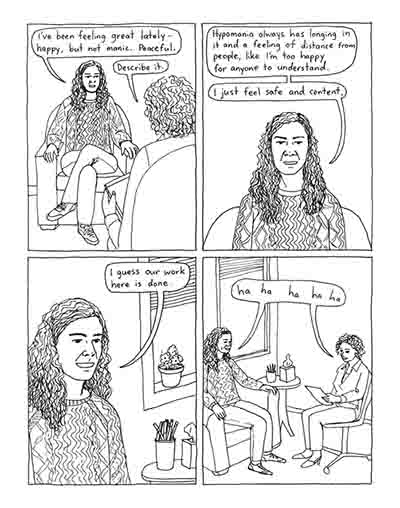 Ultimately, Roberts’ work questions the nature of meaning, and what we hold or should hold dear as we go about the business of living. It reminds one of Arthur Miller’s play, Death of a Salesman, where Linda, wife of protagonist Willy Loman, defends him by pointing out that he wasn’t a great man, a rich man, someone in the paper, or the finest character that ever lived. “But he’s a human being,” she says, “so attention must be paid.”