Prolific cartoonist and publisher Box Brown takes time off from his Retrofit Comics duties to produce this exquisitely designed little poke at cults and social media for Yeah Dude Comics.

Box Brown is one of my favourite voices in the current convivial hubbub of the alt-comics scene, both as a stylish creator and as the driving force behind Retrofit Comics. And the prolific nature of his output means that new work is never far away.

New Physics is a 20-page risographed zine that Brown has produced for Pat Aulisio’s Yeah Dude Comics, and while it might look like one of the slighter entries on his canon, after his book-length Andre the Giant, from First Second, Brown’s bold creative choices and strong design-led cartooning epitomise much of what’s appealing about his work.

Set 300 years in the future, New Physics takes an elliptical satirical swipe at commercially driven, pseudo-spiritual self-improvement ‘gurus’, as well as the way our personal interactions seem increasingly to be mediated through social media. 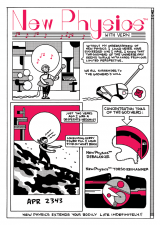 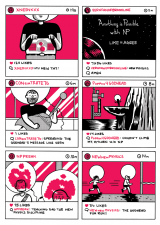 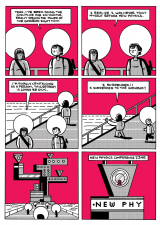 The comic charts the rise of Vern, the originator of the New Physics programme, as she and her cult become increasingly prevalent. It culminates in a huge ‘retreat’ of the movement’s followers that moves the story to a darkly ambiguous conclusion.

The book is risographed in black and a startling pink, and Brown uses the process skilfully to create a sense of depth and some interesting visual effects on the pages.

While he doesn’t quite rewire the form to the extent that Chris Ware does, he makes striking narrative choices; his interesting diagrammatic layouts and streamlined geometric artwork fit the futuristic setting perfectly. There are some fantastic brutalist buildings in Brown’s 24th century.

In the nicely executed New Physics, Brown pares away every bit of fat to leave a lean and nimble lightweight of a story that punches above its weight. It certainly whets the appetite for Number 2, his next Retrofit comic, due to make its debut at SPX (Bethesda, Maryland) in September.